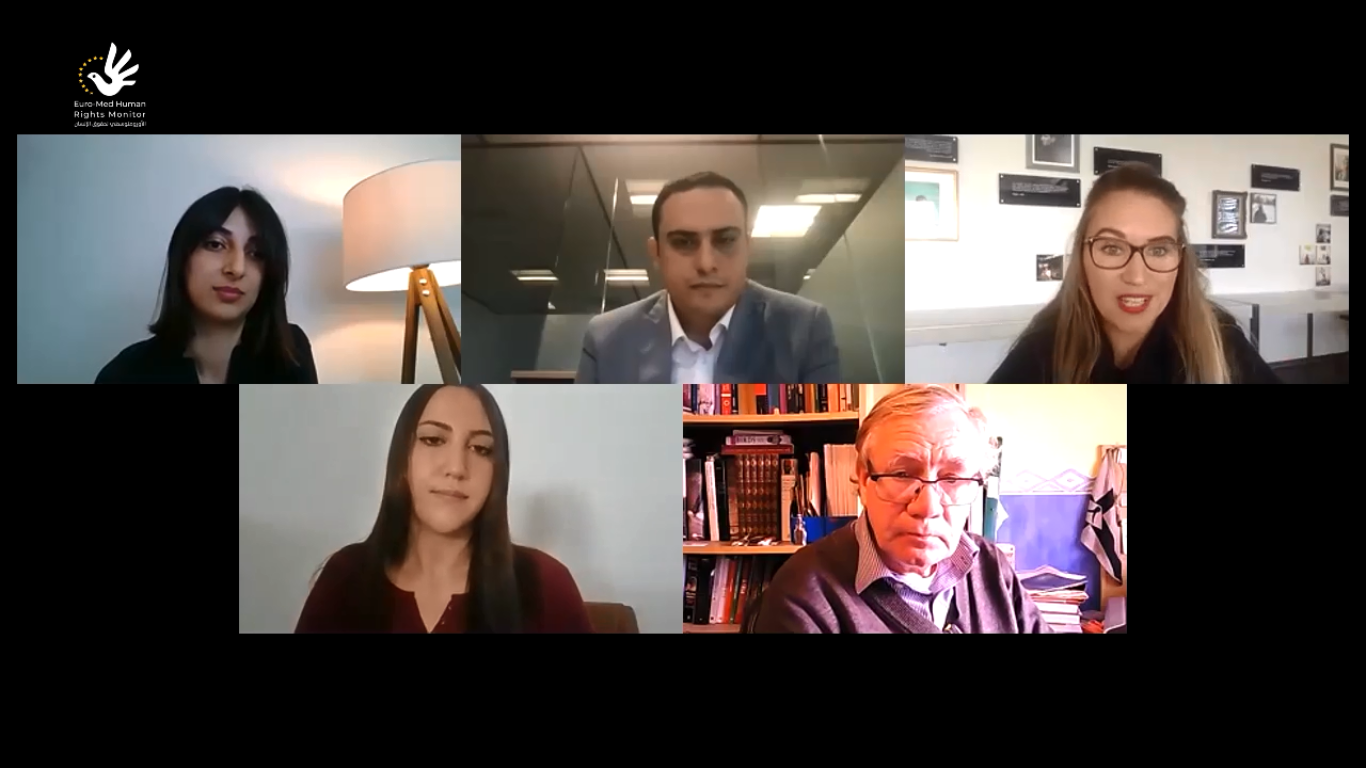 Geneva - Euro-Mediterranean Human Rights Monitor has hosted an important and timely webinar on the new proposed Swiss law to search through asylum seekers’ phones that brought together a group of international experts with different backgrounds and unique competence on the topic.

The webinar, titled "Swiss Law to search through asylum seekers’ phones... breach of human rights?" and moderated by Euro-Med Monitor's Media officer, addressed the revoking of this procedure that undermines the national and international law. It presented a background on the new Swiss law and how it undermines asylum seekers' privacy and basic human rights.

On 15 September 2021, the Swiss Parliament adopted a parliamentary initiative giving the State Secretariat for Migration the power to search asylum seekers' mobile phones to verify their identities, a procedure that human rights defenders and asylum seekers consider unacceptable and a flagrant violation of human rights.

During her presentation in the webinar, Adriana Romor, a legal expert at the Swiss Refugee Council, noted that the Swiss procedure is not only costly but also ineffective.  She highlighted that this procedure could not be justified under any circumstances.

"The introduction of this law represents an enormous breach of persons' privacy, especially as asylum seekers are already in a vulnerable position," she said.

Adriana cautioned that searching through the mobile phones of asylum seekers does not only concern those who own the devices, but it can extend to a third party of those relatives or friends who loaned the devices or used them at some point.

"It does not require us to think a lot to conclude that this procedure is not only arbitrary, but also immoral, and it reinforces the racist view of asylum seekers, and at the same time expresses a deficient arrogant approach that sees asylum seekers as only a group of criminals and liars," said Ahmed Alnaouq, Advocacy Officer at Euro-Med Monitor.

He added that the authorities have no right to require asylum seekers to provide evidence other than what they can provide, without compulsory interference in their affairs, without subjecting them to discriminatory tests or treating them as liars until their sincerity is proven.

Dima Samaro, an analyst on the intersection of tech and rights, emphasized that voluntarily. "Asylum seekers must give information on a voluntary basis. With this law & the massive amount of personal info the authorities collect from them, they won't have a choice to say no," he said.

However, Samaro noted that this procedure will make it a mandatory process that all asylum seekers have to go through.

"It is illegitimate to force asylum seekers to provide their social media passwords. It is a violation of ethics and privacy, especially for asylum seekers. It is important to remember that digital communication might not reflect a person’s character accurately," he said.

The final speaker at the Webinar, Paul Attenborough, General Secretary at Impact Policies, said that "The Swiss law to search through asylum seekers' mobile phones should certainly be challenged." Attenborough suggested that progressive lead should be taken to revoke this procedure.