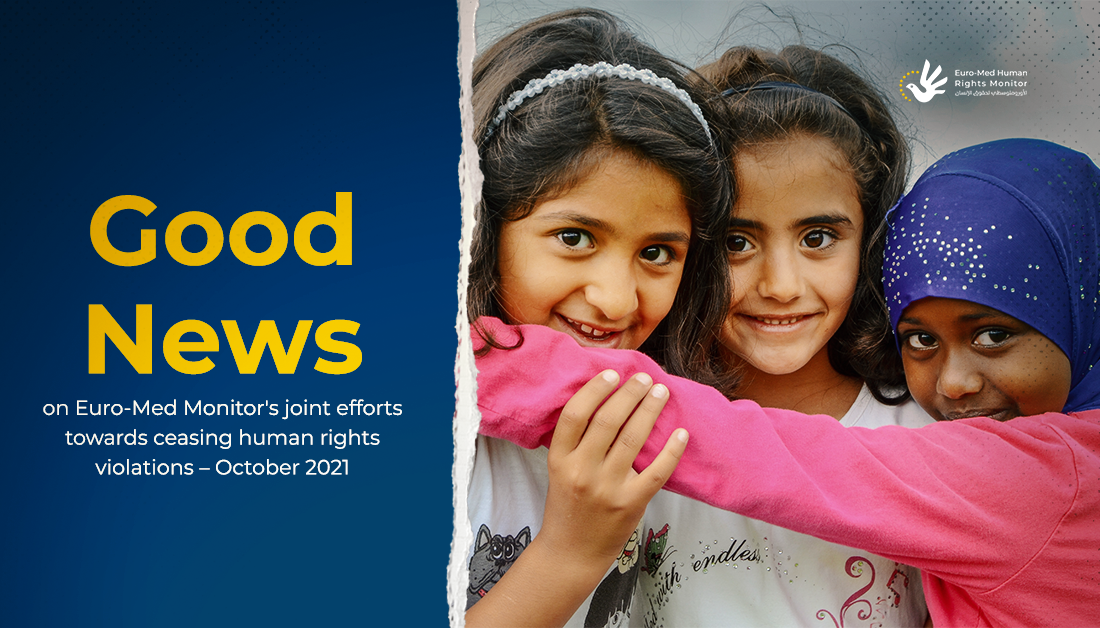 Over the decades, violations continued to plague the Middle East and North Africa, especially with the expansion of armed conflicts and the continued repression of the voices of activists, politicians, journalists, etc. However, despite the bleak human rights reality in the region, it is crucial to recognize the small steps that, in the long term, will bring considerable improvements towards ending infringements and the redress of victims.

In October, our team worked alongside partner organizations and dozens of regional and international organizations to bring real change in this regard by addressing decision-makers about practices and methodologies that should be addressed, reformed, or completely stopped. We also harnessed the power of social media to engage the public virtually in issues that affect their rights and human dignity.

Among the most important results of these efforts:

On 10 October, the Egyptian judiciary retracted a 6-month prison sentence issued in absentia against activist engineer Mamdouh Hamza in an emergency trial. The Supreme State Security Court in Egypt had sentenced the political opponent to six months in prison and included him on terrorism lists for a tweet he wrote 3 years ago.

Over the past years, human rights organizations have been calling the Egyptian authorities to stop suppressing opposition and peaceful activists, release those detained, and stop prosecuting activists for their activism on social media.

On 19 October, the Algerian authorities released journalist Rabah Karach, after serving one year, including six months suspended, in prison for spreading false news.

Since the beginning of cracking down campaigns on journalists in Algeria, human rights organizations, both international and local, have launched dozens of pressure campaigns to urge the Algerian authorities to stop intimidating and arresting peaceful activists and to abide by the rules of the constitution and international obligations.

On 27 October, the Jordanian Minister of Education, Higher Education and Scientific Research, Wajih Owais, announced that the cabinet had approved the reinstatement of some teachers referred to early retirement and provisional retirement.

The efforts of human rights organizations in Jordan and around the world have resulted in supporting peaceful activists, teachers, and unionists, by raising the voice of their demands for their labor rights and those related to peaceful assembly and the formation of unions. Dozens of campaigns have been carried out to demand that the Jordanian authorities stop illegal practices that paralyze civil activity and restrict union freedoms.

On 27 October, the Saudi authorities released the activist Ali Al-Nimr, who was arrested in 2012 when he was a minor, on terrorism charges for participating in anti-government protests. He was sentenced to death, but the sentence was commuted to 10 years in prison under the law abolishing death sentences adopted in the kingdom.

With the increasing crackdown and silencing of opponents, dozens of international and regional human rights organizations have railed to defend the rights of activists in Saudi Arabia over the past few years. In many instances, these organizations succeeded in bringing about tangible change, either by pressuring the authorities to release some activists or by pushing them to adopt new policies towards respecting the rights of activists and women.