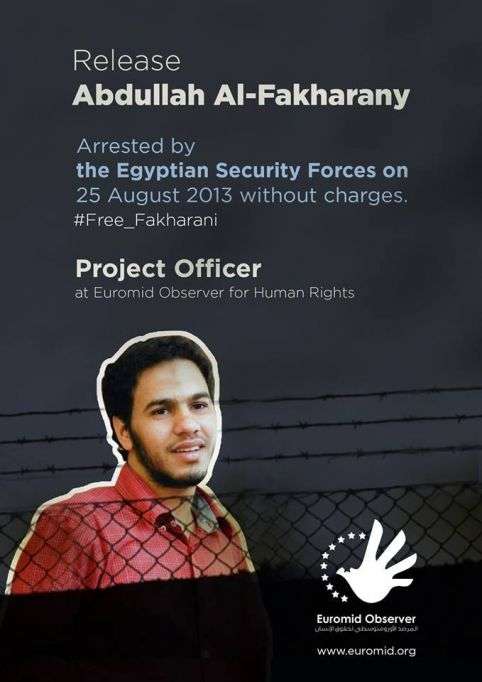 Abdullah Ahmed Mohammed Ismail Al-Fakharani (23) is a medical student at Ain Shams University. Al-Fakharani is a human rights activist and project officer at the Euro-Med Monitor for Human Rights.

Al-Fakharani was arrested by the Egyptian Security Forces on 25 August 2013 while visiting a friend, Mohammed Salah Sultan, who had been shot in the arm during the dispersal of the Rabaa al-Adawiya sit-in. Sultans’ house was under observation. Once Al-Fakharani and his friends entered the house, the Security Forces stormed it and arrested all those in the house without a warrant or a detention order. Charges were fabricated several days after their detention.

Al-Fakharani has been accused of belonging to the Muslim Brotherhood, of sedition and disturbing the public peace by spreading lies and rumors against the State of Egypt.

Al-Fakharani has been deprived of his basic legal rights and was denied prompt access to his lawyers and relatives, or an opportunity to challenge the lawfulness of his detention after his arrest. He was held for weeks with his friends at a police station, sharing a cell with criminal prisoners, subjected to severe forms of humiliation and intimidation. Al-Fakharani was then transferred to Wadi El Natrun prison where he was abused and tortured.

Al-Fakharani was questioned without lawyers present. In addition, several investigation sessions by the prosecutor were held in police stations, prisons and Central Security Forces camps. The presence of security personnel in the vicinity could cast doubt over the impartiality of the investigations.

Al Fakharani is now detained at the reception center of Tora Prison “Istikbal Tora”. He was not brought before a judge within 24 hours, as required by Egyptian law, leading to extended detention periods of 15 days renewed automatically since the 25th of August, pending charges against him. Al Fakharani could remain years in jail without being trialed.

The prosecution has not allowed for a copy of the investigation to be given to Al-Fakharani’s defense attorney, arguing that nearly 200 other persons are accused in the same case, but have not been arrested so far.

Blocking access to legal representation is a serious violation of human rights. Al-Fakharani must be given an effective opportunity to be heard promptly by a judicial officer in the presence of a legal representative, and to be entitled to a trial within a reasonable time or to release.

The International Covenant on Civil and Political Rights (ICCPR) strictly prohibits arbitrary detention, stating that, “No one shall be deprived of his liberty except on such grounds and in accordance with such procedure as are established by law.” It says that everyone detained has the right to have the legality of their detention reviewed by a court, which should order their release if the detention is not lawful.

The failure of the Egyptian authorities to respect due process for people who have been arrested is a worrying sign. Everyone must be equal before the law. The Euro-Med Monitor for Human Rights is concerned at the arbitrary arrest of Abdullah Al-Fakharani in the light of the indications that he is targeted as a result of his human rights activities, and fears for his safety and physical and psychological well-being while in detention.