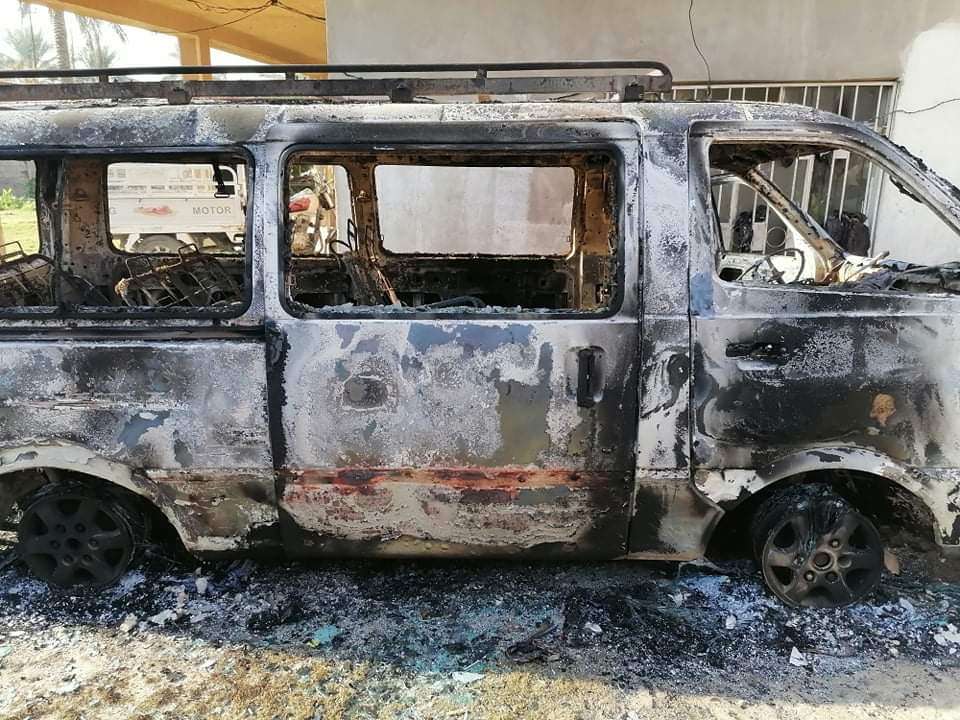 The village's 1,250 residents are still unable to return to their homes after about 40 days of displacement due to the lack of protection guarantees from the government forces, who currently control the area. Depending on limited government aid and assistance from neighboring areas, the displaced residents are living in difficult humanitarian conditions.

On 26 October, gunmen stormed the Sunni-populated Nahr al-Imam village in the Diyala governorate at around 10:30 p.m., about one hour after an earlier bloody attack on the neighboring Shi’ite- populated village of al-Rashad, which killed 14 civilians.

The attack on Nahr al-Imam seemed vengeful against the residents, who received a campaign of incitement and hate, as they were accused of being responsible for the attack.

Aside from the deaths of 12 civilians, the residents confirmed that 70 houses (out of 160 in the village), 30 dunums of agricultural land, and 40 vehicles were burned.

Residents of the village told Euro-Med Monitor that the Popular Mobilization Forces (PMF), a military body officially affiliated with the Iraqi Armed Forces, stood idly by the attack. Rather, the PMF stormed the village shortly before the attack, in a way that raised suspicions that there was a cooperation between PMF and the gunmen who attacked the village.

M.S., a resident of Nahr Al-Imam, told Euro-Med Monitor: "About an hour after the Al-Rashad attack, we were surprised that the village was stormed by forces affiliated with the PMF’s Brigade 24, whose headquarters is about three kilometers from the village. They apparently made a quick check of the village to make sure that there were no militants or possible resistance to any attack. Immediately after that, the gunmen entered the village and began carrying out their executions and sabotage.”

According to the testimonies, the gunmen carried out field executions of elderly residents and children and mercilessly burned and vandalized homes and properties.

Four residents of Nahr al-Imam told Euro-Med Monitor that the gunmen broke into the house of Karim Salama, 65, an amputee who lives with his family. The moment the gunmen entered the house, he embraced his grandson, Ayham Salama, 3, and begged them to kill him and leave the child. But they killed the child and then his grandfather in cold blood.

In another incident, B.J., a resident of the village, told Euro-Med Monitor that the gunmen brutally killed a man in his eighties.

He said that the elderly Saleh Habib was in his house on the evening of the attack, but the gunmen did not attack his house because it was located in a remote place in the village. Unaware of the attack, the old man used his cane to walk to his brother's house. The gunmen interrupted and killed him with a cleaver.

As a result of the attack, which lasted from about 10:30 p.m. until 3 a.m., a group of children and women fled towards the village of Shouk Al-Reem, one kilometer away from Nahr al-Imam. On the afternoon of Wednesday, 27 October, the security forces began assembling the people in the Mudhif [reed guest houses] of a local dignitary east of Nahr al-Imam.

At 2:30 p.m., those displaced were told that the security forces would transfer them to the area they wished to go to, as they could not protect them. About 284 families, a total of 1,250 people, who are all residents of the village, went to the Al-Harouniya security checkpoint 2.5 km away. After that, they headed to the Ba'quba District, in the center of the Diyala governorate. They were received in a mosque there, and most of them are still in Baqubah.

On 28 October, Iraqi Prime Minister, Mustafa Al-Kazemi, ordered a comprehensive investigation into the events of the villages of Al-Rashad and Nahr Al-Imam. Until this moment, no results of the investigation have appeared, and the official authorities have not identified the perpetrators of these atrocities.

Omar Ajlouni, legal researcher at the Euro-Med Monitor, said, “the Iraqi government's failure to identify the perpetrators is part of its inability to protect civilians. The authorities are responsible for informing the public of the results of investigations into the crimes committed in the villages, holding those involved accountable, and compensating the families of the victims and those affected.”

The protection of civilians, regardless of their religious affiliation, is an inherent responsibility of the state under article 15 of the Iraqi Constitution, which states: “Every individual has the right to enjoy life, security, and liberty. Deprivation or restriction of these rights is prohibited except in accordance with the law and based on a decision issued by a competent judicial authority,” he said.

The Iraqi government should provide adequate support to the displaced in their temporary accommodation, work to secure their return to their homes, and eliminate any security risks that would delay their return or pose a threat to their safety.

The government should investigate the mass killings and vandalism incidents in Nahr Al-Imam and Al-Rashad, bring those involved to justice, and make all possible efforts to ensure that such crimes are not repeated, including curbing hate speech and political and sectarian incitement.