Israel has no avenue to justice for Palestinians. Its top court's condonation of killing innocent girls in Gaza proves it 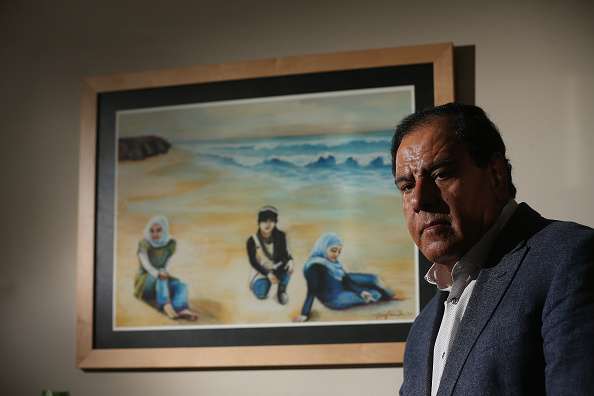 Dr. Izzeldin Abuelaish, whose children, Mayar, 15, Aya, 14, and Bessan, 21, were killed by an Israeli tank attack on their home in the Gaza Strip in 2009. [Getty]
21 Dec 2021 Israel-Palestinian Territory
Share On Copied
AR

Last month, Israel’s Supreme Court set a dangerous precedent that will give the Israeli army an open license to kill Gazan civilians during military operations without fear of any responsibility or consequences.

Citing it as an "act of war" and thereby shielding the state from damages claims, the court turned down an appeal from a Palestinian man who was seeking an apology and compensation from Israel over a 2009 tank strike that directly killed three of his daughters and his niece in the Gaza Strip.

Dr Izzeldin Abuelaish, a Palestinian doctor from Gaza, has been fighting in Israeli courts for 13 years to serve justice to his late daughters and niece. His case is a straightforward one, even by Israel’s own standards. Yet every court he turned to promptly and unthinkingly rejected his petition, including most recently the Supreme Court.

Even by Israel's unforgiving standards, Dr Abuelaish is innocent in every sense of the word. He was the first Palestinian doctor to work in an Israeli hospital. He keenly learned Hebrew to full proficiency and is a prominent activist for Israeli-Palestinian reconciliation who has never engaged in any act of violent resistance against Israel. He has a vast network of Israeli friends, including prominent journalists and military officers.

On January 16, 2009, Dr Abuelaish was sitting at home with his family when an Israeli tank fired two shells at his house, killing three of his daughters and a niece. This took place during operation Cast Lead, a “carefully planned” assault intended “to punish, humiliate and terrorise a civilian population” – according the UN Human Rights Council’s 2009 Goldstone Report.

Coincidently, Dr Abuelaish was scheduled to speak to Israeli reporter Shlomi Eldar on live television when his house was shelled by Israeli troops. With a frightened, sobbing and deeply anguished voice, he kept repeating in Arabic and Hebrew “My daughters, oh God” then explaining, “I wanted to try to save them, but they died from head wounds immediately.”

This call was an extremely rare opportunity to bring scarcely covered Palestinian suffering directly and intimately to an Israeli audience. In response, thousands of Israelis wrote angrily to the TV channel to express disapproval that Dr Abuelaish was given a platform to express his tragedy, and revealing just how severely dehumanised Palestinians are in the eyes of the Israeli public.

Some Israelis even stormed the hospital where Dr Abuelaish was had been evacuated to in Israel, interrupting a press conference he was giving with tearful eyes and a shaking voice to call him a liar and a terror supporter. “Who knows what you had in your house? Nobody is talking about that” yelled one Israeli woman aggressively at the distraught father.

Israel's army reluctantly admitted that its own fire killed Dr Abuelaish’s daughters, after initially claiming that he was harboring combatants or that his daughters were killed by a Hamas rocket - two frequent deflections Israel’s army cites to justify its killing of Gazan civilians. However, the Israeli military has consistently refused to apologise to the bereaved father, citing the killing of his family as an “act of war”.

Remarkably, Dr Abuelaish has never wavered in advocating peace. After immigrating to Canada, he wrote a 2011 memoir entitled “I Shall Not Hate: A Gaza Doctor's Journey on the Road to Peace and Human Dignity.”

Yet, despite his fervent belief in peace and coexistence, his indisputable innocence, and the incontrovertible evidence that the army killed his daughters, he is yet to receive any acknowledgement of wrongdoing or any justice for his loss.

Dr Abuelaish’s case exemplifies the impossibility of obtaining any shred of justice for Palestinians under the Israeli justice system. The fact that the Israeli government never acknowledged his passionate advocacy of peace despite his great ordeal shows clearly that Israel’s constant complaining about the absence of Palestinian peace partners is merely an ill-founded excuse to legitisime Israeli violence.

The profile of this bereaved father makes his case all the more concerning. If someone with his reputation, powerful network and exposure was unable to find justice in Israeli courts, it leaves little hope for other Palestinians.

Dr Abuelaish’s story makes clear how deeply flawed and complicit the Israeli justice system is in the suffering of Palestinians. Regardless of who you are or what you do, if you are Palestinian, Israeli soldiers, settlers and police are emboldened and protected by law if they violate your rights, and Palestinian stand no chance in obtaining justice from a system designed to keep Palestinians down.

There are echoes of Dr Abuelaish’s tragedy all throughout Gaza, where no matter how severe the tragedy or how innocent the victims, virtually no Israeli is held accountable.

During the 2018-2019 Great Return March, when Gazan civilians marched the Israeli perimeter fence that suffocates life out of the besieged enclave and demanded their right to have rights, IDF snipers fired at will. The Israeli military killed over 200 protesters and injured with live fire more than 8,079, including 6,106 left with life-changing wounds.

Israeli soldiers unremorsefully bragged about shooting Gazans for sport. One soldier boasted about maiming “42 knees in one day.” Not a single Israeli soldier or commanding officer was ever held accountable for this formidable atrocity. In fact, the only soldier to receive any sentence at all was given one month of community service for killing a 14 year old protester without authorisation.

The supreme court’s ruling against Dr Abuelaish will now further embolden Israel's army to disregard Gazan lives during escalations with full confidence. No matter how egregious of a crime the army commits against beleaguered Gazans, it can simply cite an "act of war" to be shielded from any responsibility.

It is more urgent than ever that the International Criminal Court expedite its investigations of war crimes and crimes against humanity committed in the occupied Palestinian territories. To wait a moment longer would be to abandon Palestinians to unconstrained Israeli abuses, bolstered by the Israeli justice system.