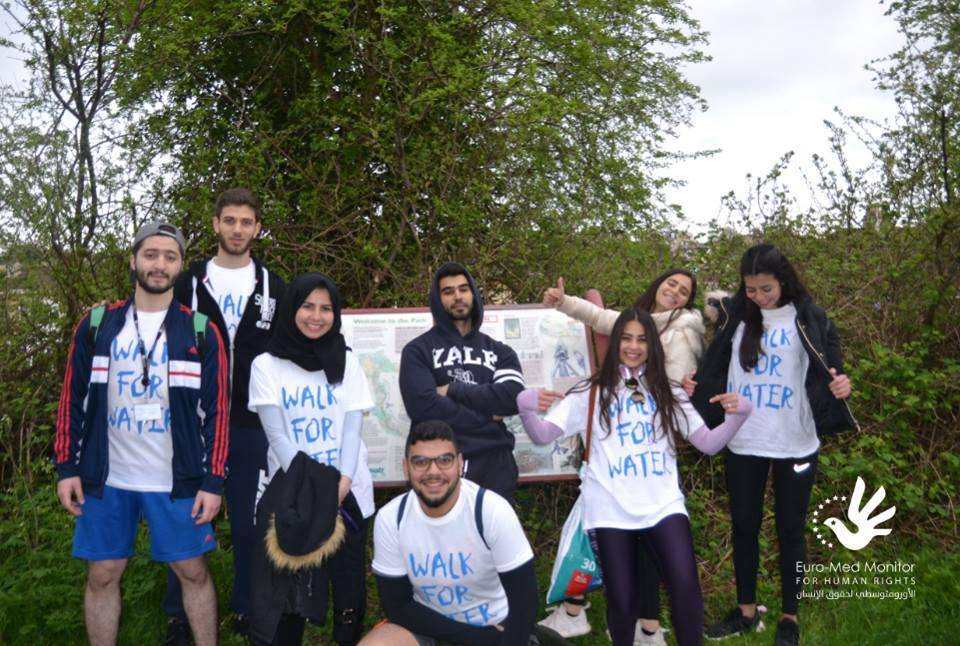 2021 witnessed many unfortunate events at the level of human rights and freedoms in Europe, the Middle East, and North Africa. While some parties were committing violations, others were retracting theirs, and more were held accountable thanks to the efforts of human rights defenders, who spared no effort to demand the end of violations and redressing victims.

This year, Euro-Med Monitor and its partners launched pressure and advocacy campaigns addressing officials and decision-makers about taking real steps towards achieving justice for victims of violations.

Indeed, in 2021, many governments and official bodies took positive steps towards improving the reality of human rights and reversing some of the violations that they had practiced for years.

Despite the bleak human rights reality in the region, it is crucial to recognize the small steps that, in the long term, will bring considerable improvements towards ending infringements and the redress of victims.

Today, we celebrate key achievements that our team took part in bringing about, which we have shared with you throughout the year.

Europe: The EU Parliament’s Committee on Civil Liberties, Justice and Home Affairs (LIBE) decided to set up a Working Group, to look into allegations around Frontex’s role in the illegal pushbacks of sea migrants and asylum seekers. Euro-Med Monitor had released an extensive report entitled “Frontex: Accountability Declined” in mid-January highlighting an excessive and alarming pattern of autonomy of Frontex, as its budget, role and staff are augmented by the EU without clear legal boundaries.

Bosnia and Herzegovina:The EU announced its intention to grant additional funding to support vulnerable migrants and refugees in Bosnia and Herzegovina, and urged the Bosnian government to rebuild the camp, which burned down in December 2020 causing the displacement of some 900 migrants and asylum seekers. Euro-Med Monitor had addressed the United Nations High Commissioner for Refugees and EU member states to provide immediate support to refugees affected by the fire and urge the government in Bosnia to take urgent measures to open additional shelter sites for migrants and asylum seekers to ensure that they do not remain without shelter, especially during the winter season and heavy snowfall.

Italy: The UN Human Rights Committee issued a report holding Italy responsible for failing to protect the right to life for more than 200 asylum seekers, including 60 children who drowned when their boat crashed off the Italian coast in October 2013, concluding that Italy failed to respond quickly to distress calls. The boat was carrying more than 400 asylum seekers, including women and children. Euro-Med Monitor had revealed in a report it published on the same case in October 2013 that the Italian authorities had failed to rescue Palestinian and Syrian asylum seekers whose boat had crashed near the Italian coasts. The authorities failed to even recover dead bodies to bury them in a decent manner and conduct an investigation into the incident.

Saudi Arabia: The Saudi Arabian authorities reduced the sentence of the Saudi-American doctor, Walid Fitaihi, from six years to a half-term suspended sentence, which means his release. Euro-Med Monitor had addressed the Saudi Arabian authorities to abolish the arbitrary ruling against Fitaihi and release him and all prisoners of conscience and stop using and politicizing the judiciary to punish activists, dissidents and human rights defenders.

Saudi Arabia: On February 10, the Saudi authorities released activist, Loujain Al-Hathloul, after imprisoning her for nearly three years for her human rights work. In a lobbying and advocacy campaign over the past few years, international human rights organizations, including Euro-Med Monitor, had shed light on the detention of Loujain and other prisoners of conscience in the Kingdom. Euro-Med Monitor had called on the Saudi authorities to repeal the arbitrary ruling issued against her and all prisoners of conscience

Palestinian Territories/Israel: On March 3, the Prosecutor of the International Criminal Court (ICC) decided to open an official investigation into war crimes and crimes against humanity in the occupied Palestinian territories (oPt). This decision allows investigating Israeli officials and soldiers for the violations they were involved in the oPt. Euro-Med Monitor had documented several Israeli violations in the oPt, addressing relevant international bodies to pressure ICC to investigate those crimes, which took place in territories under its jurisdiction, and hold Israel account.

Bahrain: The European Parliament adopted a resolution condemning human rights violations in Bahrain, most prominently death sentences against political activists. Euro-Med Monitor had released a detailed report on the unfair death sentences in Bahrain, and the Bahraini authorities' violations against prisoners of conscience such as extracting confessions from them under torture. Euro-Med Monitor corresponded with the concerned UN organizations and the UN Special Rapporteur on torture and addressed international bodies such as the European Parliament and the European Union member states to pressure the Bahraini authorities to stop their violations.

Europe: The Greek Migration Minister announced the start of vaccinating migrants and asylum seekers in the camps next May, though the government had been refusing to include this group in the anti-COVID-19 vaccination program for months. Euro-Med Monitor had addressed the Greek government to include asylum seekers and migrants in the vaccination program, as they are the most vulnerable groups considering the difficult conditions where they live.

Yemen: The Yemeni government forces and the Houthi group conducted a prisoner swap of more than 40 prisoners on April 26. The prisoner exchange deal between the two main parties to the conflict could mark the beginning of an end to the file of prisoners and forcibly disappeared persons in Yemen and introduce  a  political solution the Yemenis have been waiting for over  five years.

Bahrain: On April 11, the Bahraini authorities released prisoners of conscience Ali Al-Ghanimi and Muhammad Jawad Parveiz after they had been detained for 10 years for expressing their political views.

Palestinian territories: On May 27, the United Nations Human Rights Council adopted a resolution establishing a commission of inquiry into human rights violations in the Palestinian territories following the recent Israeli military attack on the Gaza Strip. Although nine Member States abstained from voting in favor of the resolution, it is a positive step towards justice for victims. As soon as the Israeli military began their attack on Gaza, Euro-Med Monitor’s field teams worked to document the violations that accompanied it. The organization corresponded with multiple parties to investigate mass killings, targeting civilian objects, and other serious violations committed during the 11 days of the attack.

Iraq: The Iraqi Commission of Inquiry announced that about 22 officers and hundreds of security officials would be investigated  regarding the killing of demonstrators during the October 2019 protests. The commission also confirmed its intention to uncover those involved in the killing of demonstrators once the investigation was completed. Euro-Med Monitor, in cooperation with other human rights organizations, has repeatedly addressed the Iraqi authorities during the past two years, urging  them to stop their violations against peaceful demonstrators, and to open an independent, transparent investigation into all incidents.

Spain: Spain's Minister of Social Rights announced that some 200 minor asylum-seekers who arrived in Ceuta in mid-May have transferred to mainland Spain to facilitate reuniting them with their parents and provide care for them. Euro-Med Monitor had addressed the Spanish authorities and the European Union to stop the violence, mass expulsions and forced pushbacks against asylum seekers arriving in Ceuta. The organization called for the rights of refugees to be respected and ensure their access to individual and fair asylum procedures.

Saudi Arabia: The Saudi authorities released two activists, Samar Badawi and Nassima Al-Sadah, after being arbitrarily detained for three years over their human rights activism. In a campaign of pressure and advocacy that has taken place over the years, human rights and international organizations, including Euro-Med Monitor, constantly shed light on the detention of prisoners of conscience and women human rights defenders.

Yemen: The Yemeni government announced on July 24 it had ended the evacuation of nearly 600 Yemenis who had been stranded in India due to the COVID-19 outbreak. Over the past months, Euro-Med Monitor has addressed the concerned Indian and Yemeni authorities to expedite a solution to the problem of Yemenis stranded in India, especially in light of the difficult conditions of the military conflict that Yemen is experiencing.

Saudi Arabia: The Saudi authorities released Saudi economist Abdul Aziz Al-Dakhil, after arresting him in April 2020 for exercising his right to freedom of expression through social media platforms. Euro-Med Monitor had carried out a large-scale campaign of pressure and advocacy, in partnership with human rights defenders and academics, to shed light on the issue and urge the Saudi authorities to release him. The campaign included several activities, including sending a letter, signed by about 23 prominent academics from around the world, to the Saudi authorities, and organizing a webinar where rights experts from different countries discussed Al-Dakhil’s detention conditions and the legality of his arrest.

UAE: On August 30, the President of the United Arab Emirates, Khalifa bin Zayed, issued a federal law establishing a National Human Rights Authority to enhance the UAE’s regional and international standing in human rights, spread a culture of human rights, and raise awareness in society.

Bahrain: The Bahraini government finally released 30 prisoners, most of them prisoners of conscience, under a 2017 "alternative sentences" law that allows prisoners who have spent at least half of their sentences in prison to complete them outside prison through measures including home detention and electronic monitoring. Over the past years, Euro-Med Monitor and its partners have repeatedly called on the Bahraini authorities to release human rights and political activists and change their policy restricting freedom of expression and opinion.

Libya: The Libyan government, in cooperation with the Moroccan authorities, responded to official letters addressed by the Euro-Med Monitor to the Libyan and Moroccan authorities, calling on them to end the suffering of hundreds of Moroccan migrants detained in Libya. In its speech, Euro-Med Monitor had called on the authorities to visit the detention centers of Moroccan citizens and start preparing their identification papers and travel documents in preparation for their return to Morocco.

Tunisia: The suspended Tunisian parliament member, Yassin Ayari, who had carried out a hunger strike denouncing the military trials affecting civilians in the country, was released. Euro-Med Monitor had addressed the Tunisian authorities, calling for the release of the MP and respect for his parliamentary immunity in accordance with the Tunisian constitution, and not to take advantage of the current exceptional circumstances to infringe on rights and freedoms.

Jordan: The Jordanian authorities announced that the cabinet had approved the reinstatement of some teachers referred to early retirement and provisional retirement. Euro-Med Monitor had issued a detailed report that highlighted the illegal measures against teachers in Jordan, and called on the government to stop its campaign against the Teachers’ Syndicate, reinstate teachers referred to provisional retirement and early retirement, and respect their rights to express opinion and peaceful assembly.

Iraq: The Iraqi Ministry of Foreign Affairs announced the release of 41 Iraqis who had been detained in the Libyan capital, Tripoli, after their attempts to reach Europe by sea had failed. Throughout 2021, Euro-Med Monitor called on the governments of countries that have citizens detained in prisons in Libya to make greater, more serious efforts and cooperate with the Libyan authorities to release these migrants, put an end to the humiliating violations against them, and end the suffering of hundreds of families who are constantly worried about the fate of their children.

Denmark: The Danish Parliament revoked the membership of the former Minister of Immigration, Inger Stojberg, after she had ordered the separation of young asylum-seeking couples, in contravention of the law, during her tenure. Euro-Med Monitor condemned the MP's statements about the Syrian refugees in the country and called on the Danish authorities to end the growing hate speech against foreigners.

Europe: The European Union approved imposing sanctions on the Russian paramilitary mercenary group, Wagner, and on eight people and three companies associated with it for its human rights violations.