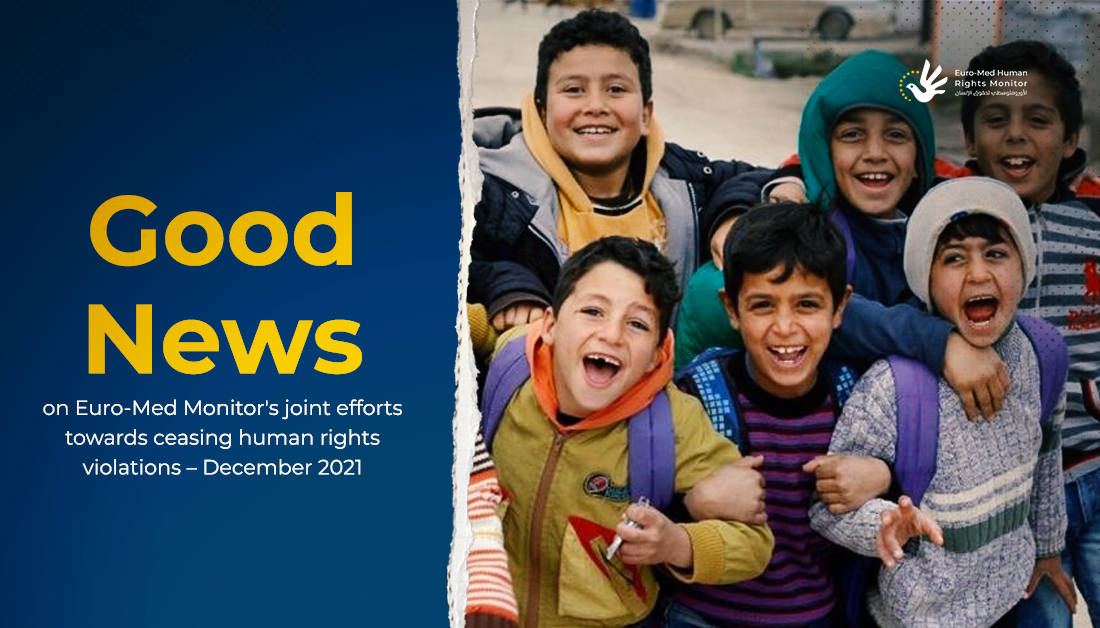 Over the decades, violations have continued to plague the Middle East and North Africa, especially with the expansion of armed conflicts and the constant repression of the voices of activists, politicians, journalists, and others. However, despite the bleak human rights reality in the region, it is crucial to recognize the small steps that, in the long term, will bring considerable improvements towards ending infringements and the redress of victims.

In December, our team worked alongside partner organizations and dozens of regional and international organizations to bring real change in this regard by speaking to decision-makers about practices and methodologies that should be addressed, reformed, or completely stopped. We also harnessed the power of social media to engage the public virtually in issues that affect their rights and human dignity.

Among the most important results of these efforts:

On 8 December, the United States imposed sanctions on five officers in the Syrian regime forces. Two of them are accused of carrying out chemical attacks against civilians, while the others are senior security and intelligence officials. They are Tawfiq Muhammad Khaddour and Muhammad Yusef al-Husari, Adeeb Nimr Salama, Qahtan Khalil, and Kamal Al-Hussein.

Since the beginning of the conflict in Syria, human rights organizations have intensified their lobbying and advocacy campaigns, calling for urgent sanctions on all those involved in widespread human rights violations.

On 13 December, the European Union approved sanctioning the Russian paramilitary group, Wagner, and eight people and three companies associated with it for its human rights abuses.

Last year, Euro-Med Monitor issued a report referring to the role of Wagner in laying large quantities of mines in the city of Sirte and the roads leading to it from the south and west, calling for international accountability of those involved, including the parties and countries supporting them.

The Danish Parliament revoked the membership of the former Minister of Immigration, Inger Stojberg, after she had ordered the separation of young asylum-seeking couples, in contravention of the law, during her tenure. Euro-Med Monitor condemned the MP's statements about the Syrian refugees in the country and called on the Danish authorities to end the growing hate speech against foreigners.

On 23 December, the authorities released Sana Seif after she spent 18 months in prison for insulting the police officer who physically and verbally assaulted her, her sister, and her mother.

On 8 December, the authorities released human rights researcher and activist Patrick Zaki, who was arrested last year upon his return from Italy to Egypt, pending the resumption of his trial on charges of “spreading false information.”

At the end of the same month, the Public Prosecution decided to release Youssef Al-Qaradawi's daughter, Ola Al-Qaradawi, after more than our years in pretrial detention, on the grounds of joining and funding the Muslim Brotherhood, which has been banned in Egypt since 2013.

On 30 December, an unknown group released Libyan journalist Siraj Al-Maqsabi after he was abducted on 22 November from his workplace in the city of Benghazi, east of the country. The security forces under the authority of Khalifa Haftar did not take action regarding the incident.

Euro-Med Monitor and its partners had called on the Libyan authorities to stop prosecuting journalists and civil society activists throughout the country, to stop obstructing their work and preventing them from exercising their right to express their opinions, and to provide a safe environment for journalistic work.