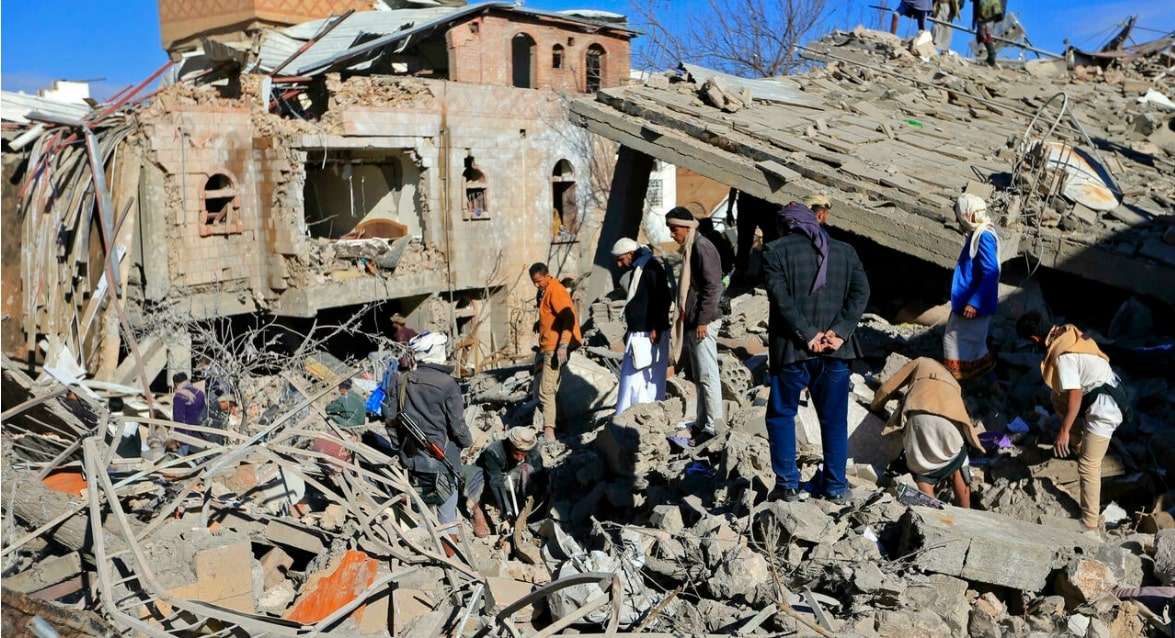 Geneva – The Arab coalition’s warplanes bombed Yemeni cities during the past few days, including civilian objects such as a detention center in Saada and residential neighborhoods in the capital, Sana'a. An international, impartial, and transparent investigation should be opened into these bombings, Euro-Mediterranean Human Rights Monitor said in a statement.

The bombing operations were indiscriminate and carried out without any urgent military necessity, thus constituting a grave violation of international humanitarian law and may amount to war crimes.

Last Monday, the first of the bombings began with a populated residential neighborhood on Al-Sitteen Street, north of the capital, which left 10 civilians killed and others wounded, including five women.

The same day also witnessed direct raids on other houses, killing at least 10 more who were pulled out of the rubble.

The deadliest attack took place early Friday morning and targeted a temporary prison in Saada while guards and inmates were inside. Initial data indicate that about 70 people were killed and about 150 others were injured. Some who were inside were pulled out from under the rubble, while others are still missing.

The coalition’s announcement that it had not been informed that the place was a detention center does not absolve it of responsibility for the violent bombing.

Other civilians were killed or wounded in raids carried out by coalition warplanes on Thursday, which targeted the branch of the Ministry of Communications in the city of Al Hudaydah. As a result, communication and internet services were cut off in large areas of the country, hindering the documentation of the bombing victims.

The most dangerous part of these bombing is that it came with a vindictive, collective-punishment nature. Houthi forces had attacked Abu Dhabi Airport with drones last Monday, killing three civilians and wounding six others of foreign nationalities, according to Emirati media.

All attacks targeting civilians, civilian objects, and populated areas constitute grave violations of the rules of international humanitarian law. The parties to the conflict should respect the rules of engagement established by the Geneva Convention during armed conflicts.

The international community should take urgent action to stop the multilateral armed conflict that has continued since 2014 in Yemen, ensure the protection of civilians and civilian objects, and put an end to the policy of impunity prevailing in the country. The continued silence of the international community exacerbates the tragedy of Yemenis, making them the victims of a vicious cycle of violence.

An immediate decision should be taken to stop the armed conflict and indiscriminate raids, establish an international criminal justice mechanism to investigate all crimes committed during the conflict to achieve accountability and justice, and enable the Yemeni people to decide their own fate without external interference.