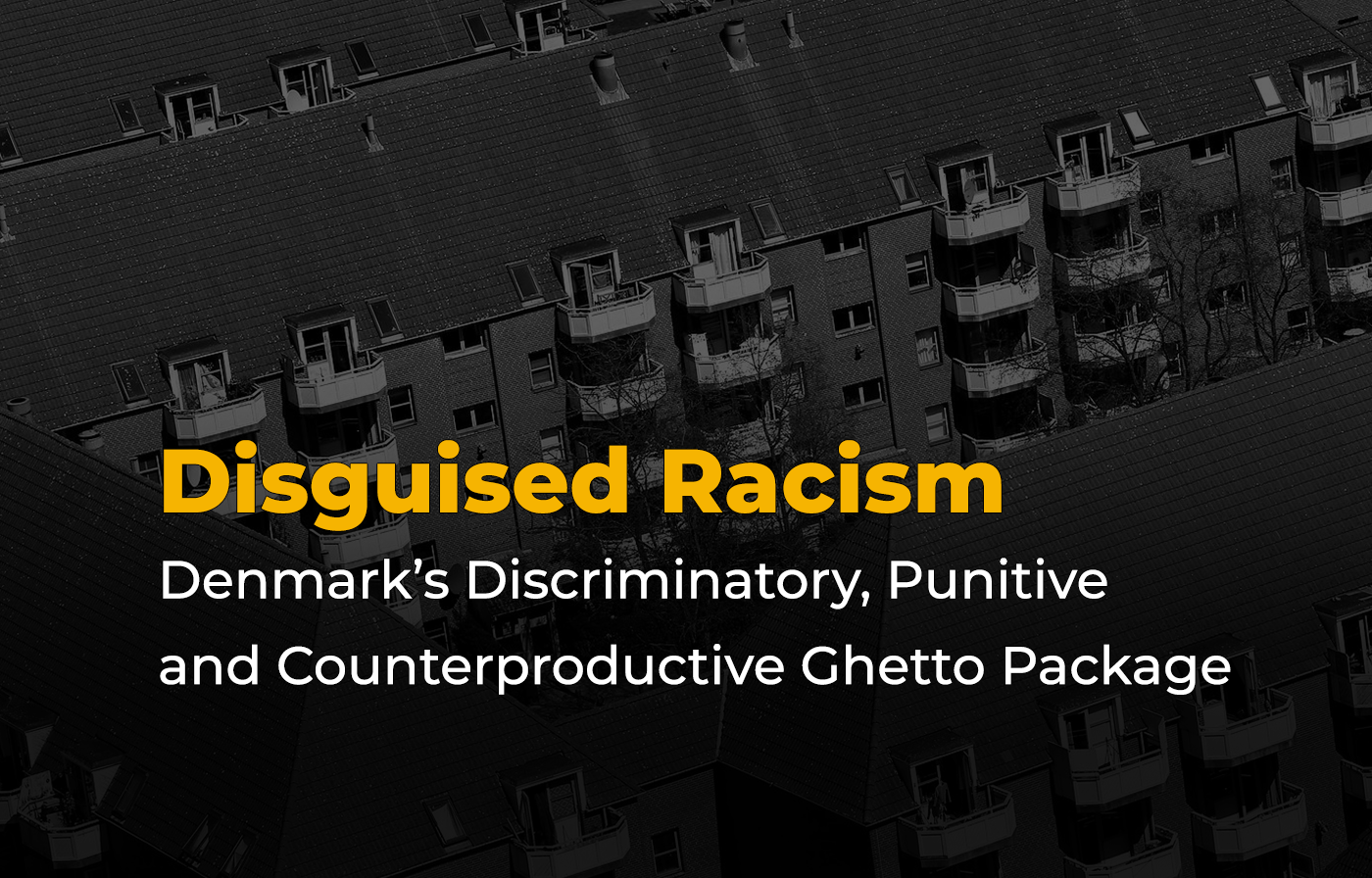 This policy brief aims to provide a concise summary of some of the key consequences of labeling an area as a “Ghetto” or “tough Ghetto,” in Denmark as well as the implications of the policies introduced by the Danish parliament and government to end “Ghettoes” by 2030.

Euro-Med Monitor concludes that since its inception in 2010, the annual Danish “Ghetto list” maintained by the Ministry of Transport, Building and Housing has been part of the problem rather than the solution. Whether in terms of its flawed and discriminatory criteria, its heavily punitive and counter-productive policies, or its very stigmatizing name, the “Ghetto list” contributes to fueling xenophobia, racial prejudice and intolerance against vulnerable minorities. It sows fear, insecurity, mistrust and resistance amongst the groups it targets, and it stands in violation of the European Convention on Human Rights and EU law vis-à-vis the rights to non-discrimination, equality and adequate housing, as well as the right of equality before the law and equal treatment before tribunals.

Since 2010, the Danish government’s Ministry of Transport, Building and Housing has been maintaining and updating an annual list of “Ghettoes” in the country[1]. The designation “Ghetto” refers to a “particularly vulnerable public housing area” which according to Danish authorities has social problems and contains a majority population of "non-Western" ethnicities. In 2019, the Ghetto list included 29 areas and districts[2]. Any neighborhood or area that fulfills three out of five criteria could be added to the list. Those criteria are[3]:

An area could be further classified as a “tough Ghetto,” if it remains on the Ghetto list for more than four years.  In 2018, the Danish government announced its goal to get rid of all “Ghettoes” by the year 2030[4], either by demolition or re-development. Several harsh punitive measures have been introduced in what is called “the Ghetto Package” to purportedly encourage integration and end the Ghettoes.

The consequences of a Ghetto designation are several. Some of the most problematic include:

If an area remains on the Ghetto list for 4 consecutive years, the share of public housing in that area would be reduced to a maximum of 40% by 2030. This means the eviction of entire blocks and subsequent demolition, selling or re-development of those buildings into private or co-operative housing to substantially change the character of those areas[5]. Tenants in those buildings would be offered alternative housing but would not be able to decide for themselves the quality, location or cost of the alternative, and would be evicted if they refuse. This disproportionately affects low-income, largely Muslim neighborhoods, as such areas are the most likely to be designated as Ghettoes in the country compared to neighborhoods with similar problems or vulnerabilities that are inhabited by residents of white ethnicities.

“Ghetto Children” whose families receive welfare benefits must be separated from their parents from the age of 1 for at least 25 hours per week, excluding nap time[6] to be enrolled in state kindergartens with a maximum migrant intake of 30%. Otherwise, the family would lose welfare benefits. The goal is to for the “Ghetto Children” to receive mandatory instructions in “Danish values,” including the traditions of Christmas and Easter, as well as learn the Danish language. Meanwhile, non-Ghetto residents in Denmark can choose whether to enroll their kids in preschool up to the age of six. Ghettoes children must also undergo a Danish language test before being admitted to school, or otherwise receive intensive Danish courses and attend a summer school in order to start grade 1[7].

The Danish government’s ghetto deal sets higher penalties for crimes committed in Ghetto areas. People convicted of misdemeanors receive twice the penalty if they live in a designated ghetto[8]. Ghetto rules also allow for the collective punishment of entire families, by eviction, if a family member is convicted of a criminal act[9]. Convicted criminals and people on public welfare would face restrictions on moving to areas on the Ghetto list, especially “tough Ghettoes”[10].

Punctuated by numerous references to people from “Non-Western” backgrounds, including Danish citizens from non-white ethnicities, Denmark’s “Ghetto” law raises serious concerns of discrimination based on race, ethnicity, national origin, and other protected grounds. The legality of the “Ghetto package” is currently being litigated in the Danish court system. For instance, a lawsuit against the Danish Ministry of Transport and Housing has been filed by 12 residents of Copenhagen in 2020 to declare a development plan the ministry passed under the Ghetto legislation unlawful under the European Convention on Human Rights and EU law[11].

The underlying target of the “Ghetto package” is migrants and Danish citizens of non-Western origins rather than the purported social problems emanating from these areas such unemployment, under-education or crime. The Danish government is more concerned by clusters of non-white populations in the country than anything else. This was made clear in 2021, when Denmark’s Minister of the Interior and Housing revealed plans to introduce a requirement that would reduce the number of “non-Western background” in “Ghetto” areas to less than 30% by 2030.

In essence, the “Ghetto package” poses a serious violation of the rights to non-discrimination, equality and adequate housing, as well as the right of equality before the law and equal treatment before tribunals.

Since the inception of the “Ghetto list” in 2010, the very use of the word “Ghetto” to describe vulnerable communities of mainly Muslim individuals has been part of the problem rather than the solution. In 2019, the Danish housing minister, Kaare Dybvad, acknowledged that the word “Ghetto” is a “derogatory” and stigmatizing label to put on vulnerable or marginalized areas, and instead proposed using the label “underprivileged areas.[12]” However, for nearly a decade, much damaged has already been done by the sinister use of that word that cannot be simply reversed by introducing a new label.

The word “Ghetto” is still deeply embedded in mainstream political discourse in the country where shunning “Ghetto” areas has become a textbook exercise of political expediency in some Danish political parties. For instance, in 2018, Prime Minister Lars Lokke Rasmussen remarked in his New Year speech that ghettos could “reach out their tentacles onto the streets” by spreading violence, and that because of ghettos, “cracks have appeared on the map of Denmark[13].”

The use of the word “Ghetto” in reference to low-income areas whose main population has Middle Eastern, African or Muslim origins, as well as the overall policy discourse on “ending Ghettoes” by 2030, contributes substantially to fueling xenophobia, racial prejudice and intolerance in the country.

It creates a false perception that racial and ethnic minorities are adamant to create so-called “parallel societies,” whereas evidence has strongly suggested the very opposite. For instance, recent research suggested that only 2% of non-Danish-born people prefer living in neighborhoods with a majority of inhabitants coming from non-Danish backgrounds[14]. A third of the surveyed sample indicated their preference for living close to family and friends as motivating factor in their housing choices for both emotional and practical reasons relating to housing affordability and availability.

The proposed “remedies” in Denmark’s Ghetto rules also contributed markedly to sustaining and fueling racial prejudice and intolerance against vulnerable minorities. For instance, the “Ghetto package” enables the Danish police to selectively crackdown on areas designated as “Ghettoes” and “tough Ghettoes.” This over-policing risks inflating the number of crimes in targeted areas compared to the national average, which in turn leads to sustaining a perception of “Ghetto” areas as criminal hotspots and subsequently fueling prejudiced and dangerous narratives against minorities.

The coercive and punitive nature of the measures proposed and undertaken by the Danish government to get rid of “Ghetto” areas by 2030 point towards a deeply worrying politicization of the issue. To appease voters with hardline views, rhetoric of strength, deterrence and cracking down is chosen for political expediency over rhetoric of incentives, opportunities and integration. This creates a toxic cycle of rhetorical competitiveness that leads to creating policies within a paradigm of sticks and no carrots, and assimilation rather than integration. This leaves targeted residents of “Ghetto” areas in a state of fear and resistance towards government measures.

Mjølnerparken, a housing project of 2,500 residents in the Nørrebro area of Copenhagen has been classified as a “tough Ghetto.” 98% of the neighborhood’s residents come from Middle Eastern and African origins. Subsequently, the Danish government has decided to sell apartment houses in Mjølnerparken as a way of ridding those buildings of its unwanted tenants. In Aarhus, Denmark’s second largest city, 9 buildings in the Gellerup district and 3 buildings in Bispehaven district have been designated for demolition in 2018, citing the Ghetto law[15]. This would lead to displacing and forcibly relocating 1,000 families. The demolished constructions will be replaced by 2000 owner-occupied homes and 675 commercial leases[16].

This puts low-income residents in grave danger, given that Denmark already suffers from a housing crisis in terms of accommodation availability and affordability. Denmark has one of the highest proportions of housing costs in the Western world, where an average Danish household is estimated to spend more than a quarter of its disposable income on housing[17].

The Ghetto laws should essentially be seen as directly linked to, if not part of, Denmark’s “zero asylum seekers” policies[18]. These punitive measures have the implication of making life impossible for the already vulnerable and ostracized low-income minorities. This could be seen as a way of creating a frightening cautionary tale for potential asylum seekers to propel them away from the country, if not as a way of putting pressure on low-income individuals from non-Western ethnicities to leave Denmark.

In light of the aforementioned grave implications of the “Ghetto list” and the policies adopted by the Danish parliament and government to end “Ghettoes” by 2030, Euro-Med Monitor proposes the following recommendations: