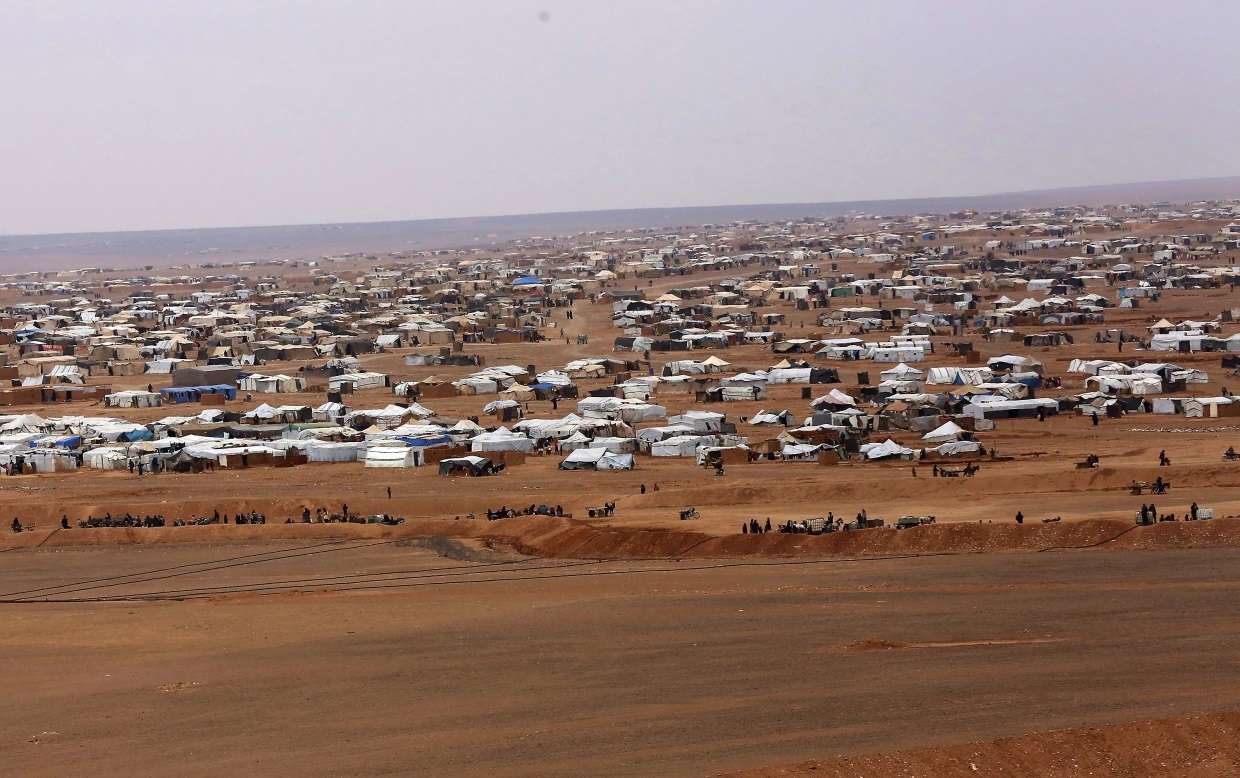 Geneva – All concerned parties should take urgent action to provide relief support to the displaced Syrians in the al-Rukban camp on Syria's southern border with Jordan as the humanitarian crisis intensifies with the depletion of basic materials, Euro-Med Human Rights Monitor said in a statement.

More than 8,000 displaced Syrians in the al-Rukban camp are suffering extremely poor living conditions as the Syrian regime forces besiege the camp, preventing the entry of basic materials and living necessities. In addition, Jordan closed its side of the border, and the international coalition forces that control the camp in the 55-kilometer area refuse to provide any humanitarian assistance to the displaced.

Head of the al-Rukban local council Mohammed Ahmed al-Darbas told Euro-Med Monitor: "The residents of the camp are suffering the most difficult living conditions since the start of the siege in July 2019.”

"There are no doctors or medical facilities in the camp to provide medical care to the displaced. They used to go to a UNICEF medical point on the Jordanian border, but the Jordanian authorities closed it two years ago under the pretext of fighting the Coronavirus pandemic.”

"A number of children and elderly have died due to the lack of health care and the depletion of basic foodstuffs. We do not currently receive any humanitarian aid from abroad. The camp completely ran out of milk for the children.”

"The siege aims to force the refugees to return to the regime-controlled areas. The displaced here refuse to return because they fear for their lives. Many of the people who were in the camp and returned to the regime's areas have been subjected to killing, arrest, or disappearance. Young people were forced to participate in the battles with the opposition’s militants."

It is feared that the UN would become involved in the "voluntary departure of the people of al-Rukban" without providing safety guarantees for them, as their lives might be threatened in the regime-controlled areas.

Last year, camp residents received a document from the UN and the Syrian Arab Red Crescent stating that they would support their voluntary departure in several batches for a period of three months (September, October, and November 2021) to help those wishing to leave the camp to the areas they choose. The document explicitly includes a repudiation of providing protection or support to IDPs returning to the areas controlled by the regime.

The document stated, "The responsibility for the security and safety of individuals (displaced people) rests with the controlling parties and the government of the Syrian Arab Republic. The United Nations and the Red Crescent always remind everyone of this," emphasizing that no guarantees were provided to the departures.

In September 2021, the twenty-fourth report of the United Nations Commission of Inquiry on Syria confirmed that “the country is unfit for the safe and dignified return of refugees.”

Anas Aljerjawi, Euro-Med Monitor's Chief Operations Officer, said: "It is disgraceful that thousands of displaced people are left without food or medical supplies in a barren desert environment and harsh weather conditions. This abandonment reflects a massive moral failure of all parties involved."

The number of refugees in the camp had reached about 110,000, however, the siege and closure of the Jordanian borders in 2015 caused many to leave over the past several years. Many have returned to Syrian regime-controlled areas to escape the siege, despite the dangers and retaliatory security practices that they may face in those areas. In the meantime, there are about 8000 displaced people in the camp.

The UN and relevant relief organizations should make all possible efforts to deliver basic food and medicine supplies to the al-Rukban camp and support the thousands of residents who battle hunger and disease there.

The Jordanian authorities should stand by their moral obligations toward the displaced people in the al-Rukban camp and take all necessary measures to alleviate their suffering in the border camp.

The United Nations should not participate in the transfers of the displaced from the al-Rukban camp to the Syrian regime-controlled areas as long as they remain unsafe and should not contribute to exposing these people to the dangers affecting their security and safety.