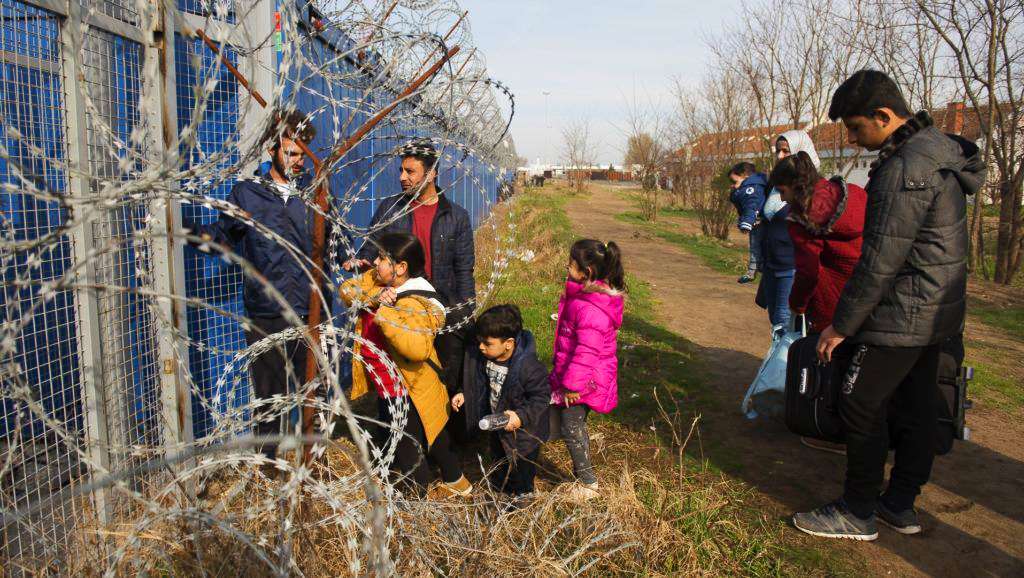 A family waits at the gate having been selected to claim asylum in Hungary / Photo: picture alliance/abaca/O. Marques
16 May 2022 Europe
Share On Copied
FR | AR

The Ukraine war has worsened the systematic discrimination experienced by non-Ukrainian asylum seekers locked out of the EU at the Serbia-Hungary border, developing two parallel asylum systems for Ukrainians and for all others in a climate that is akin to “migratory apartheid,” Euro-Med Human Rights Monitor said in a statement today.

While the EU Commission stands at the side of Ukrainian refugees, lighting up the EU institutions’ building in Brussels with the colors of Ukraine’s flag and lauding the millions of Europeans who have mobilized to help “their neighbors in need,” all other refugees are still on the move, lingering in a limbo of increasing cruelty and dereliction.

After the Russian invasion of Ukraine at the end of February, police brutality towards these migrants has become even more severe, and border crossings in Eastern Europe are now almost impossible due to the growing number of police patrols.

Migrants trapped in Eastern Europe found themselves squeezed between even more violent and brutal borders, tightening up more each day.

In Serbia, on the western Balkan route, where migrants tend to spend several months or even years trying “the game” of crossing into the EU, the passage to Hungary is completely locked and criminalized, while the Hungarian border with Ukraine is wide open for fleeing asylum seekers.

The European Court of Justice has already condemned Hungary for its illegal pushback of migrants in December 2020, however, the Hungarian authorities continued to reject migrants to their neighboring countries, including Serbia, undisturbed.

As a consequence, some 3,679 migrants are still waiting in Serbian state-run camps, and around 4,000 people are camping in northern Serbia, in abandoned buildings, private accommodations, or forests, like Radanovac, to reach EU territory.

While Hungary has allowed 572,760 Ukrainian migrants to flow in as of 9 May, the same country tightened its walls and augmented police patrols to stop asylum seekers from Serbia, mostly Afghans, with police often sending dogs after them, beating and arresting them.

The contradictions of the Hungarian migratory system, which remains closed only for those who attempt to enter through the Serbian border, reflects the systematic discrimination lived by certain asylum seekers all over Europe based on categories like ethnicity, religion, nationality, and race.

“Similar policies and practices of racial discrimination have multiplied all over Europe after the start of the war in Ukraine, developing two parallel asylum systems - one accessible, receptive, and wide open for Ukrainians, the other shut and absent, when not openly violent, for all other refugees,” said Michela Pugliese, Euro-Med Monitor’s Migration and Asylum Researcher, “It's akin to a migratory apartheid, a dichotomous border that selects and prioritizes some peoples while dehumanizing and illegalizing some others, not based on their well-founded fear but solely on their fate of birth.”

Euro-Med Human Rights Monitor calls on governments of Serbia and Hungary to immediately end all illegal pushbacks and collective expulsions; to investigate crimes committed against migrants and asylum seekers and introduce measures to prevent future violations; and to fulfil their obligations to ensure effective access to the procedure for granting international protection.

Euro-Med Human Rights Monitor calls on the European Commission to urgently end this dichotomous border replicating all over Europe and inflicting and supporting a “migratory apartheid;” to ensure that people in need of international protection have access to fair and effective asylum procedures and to treat all forcibly displaced asylum seekers fleeing violence, persecution and war equally, as enshrined in the Refugee Convention of 1951, in particular Article 3 requiring states to “apply the provisions of this Convention to refugees without discrimination as to race, religion or country of origin;” and to consider the fight against racial discrimination a key issue in the current asylum, migration and integration debate.