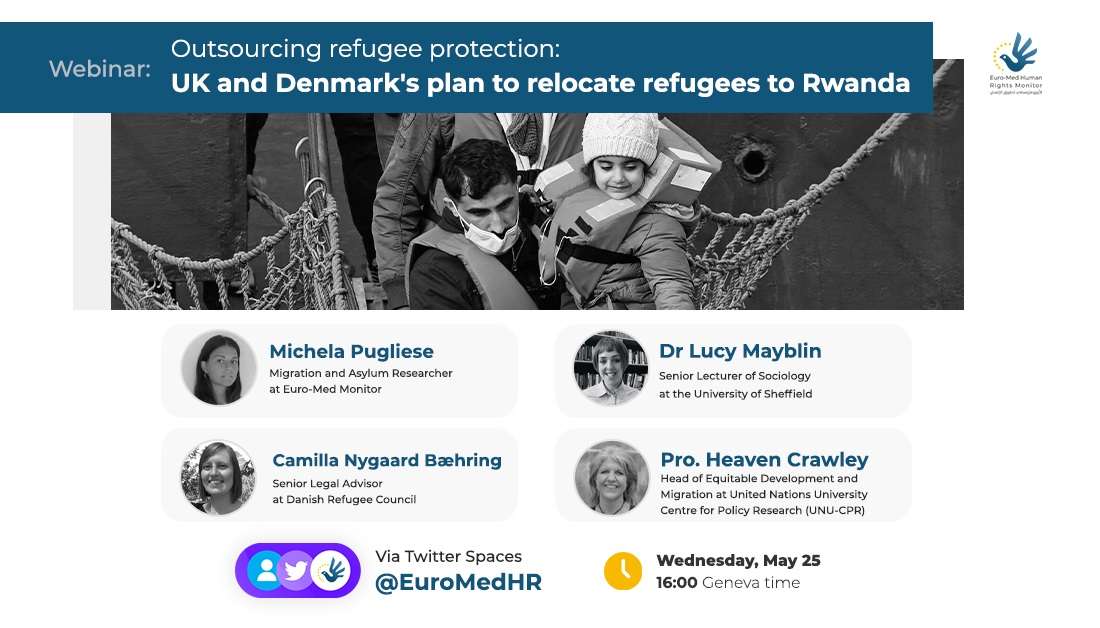 The objective of the discussion was a reminder that such bilateral agreements are incompatible with refugee and human rights and anti-trafficking laws, and perpetuate unequal and neo-colonialist power structures between countries, where, for instance, development aid is provided only in exchange for migration containment.

The discussion brought together three experts - Lucy Mayblin, Professor Heaven Crawley, and Camilla Nygaard Bæhring - to discuss the UK-Rwanda agreement concluded on 14 April 2022 to transfer asylum seekers arriving in the UK to Rwanda in order to process their claims and host them there. The webinar touched on a similar proposal made last year by Denmark that was recently reinvigorated.

Introducing the webinar, Michela Pugliese, Euro-Med Monitor’s Migration and Asylum Researcher, reminded attendees, “the UK-Rwanda deal is only the latest and surely not the last step in a long-running and threatening externalization process involving all Europe.” Puglisese added, “this process has seen a disturbing acceleration in recent times, under the pressure of the so-called ‘refugee crisis’ or, better, the crisis of European migration governance.”

“These attempts would jeopardize not only the human rights and bare lives of people seeking a sanctuary in Europe but also the global refugee protection system, advancing the idea that wealthy and stable states in the Global North can pay poorer states to get rid of their legal obligations and responsibilities,” she recalled.

The first speaker, Heaven Crawley, Professor of International Migration at the Centre for Trust, Peace and Social Relations at Coventry University, said that the UK-Rwanda deal is “a culmination, and possibly not the end, of a history of policy measures within the UK to deter, put off, and create a hostile environment.” She added that this goes back several decades and especially targets migrants entering the UK irregularly, but she reminded us that “there is almost no way to claim asylum in a regular way.” She also highlighted that the vast majority of refugees are hosted in the Global South and that the majority, about 61%, of the people who arrive in UK across the English Channel are actually recognized as refugees.

Professor Crawley also referred that the conditions that refugees face in Rwanda are harsh, “as it has a very high economic growth rate, but that wealth is not distributed,” mentioning the Congolese refugees she has worked with, “who’d been in Rwanda for 20 years, literally with no access to electricity and very few job opportunities.”

The second speaker, Camilla Nygaard Bæhring, Senior Legal Advisor with the Asylum and Refugee Rights Division at the Danish Refugee Council in Denmark, provided an insightful overview of the changes made to the Danish Aliens Act and the illegitimacy of such a proposal.

She stated that they [at the Danish Refugee Council] have also been participating in meetings with the Danish ministers who are responsible for this area, but “they do not provide any answers as to how we can ensure that people who were to be sent to a third country would be taken care of in a proper manner.” She concluded by saying that, for now, the Danish plan is not feasible at all, because it is still bound by agreements on Dublin and Eurodac and because the numbers in Denmark are very low so “it’s really difficult to understand why Denmark shouldn't have the capacity to host asylum seekers.”

Lucy Mayblin, Senior Lecturer of Sociology at the University of Sheffield, stated, “the aim of the new plan is to punish people today in order to deter imagined people in the future from even making a journey,” but that “research around the world over several decades has failed to find every evidence that harsh measures, like offshoring, succeed in having a deterrent effect.” She described the moment we are in as the “next step in the mainstreaming of the far right, normalizing and legitimating authoritarian and illiberal practices.”

She explained that the British Empire was hostile to colonized peoples and their human and refugee rights at the beginning, so “they imagined a hierarchy of humanity where only some humans were fully ready for human rights, where some lives were worth more than others.”

In conclusion, she recapped that this logic of differential humanity didn’t come from nowhere but “was forged in nearly 500 years of colonialism,” so the UK has been relentlessly trying for the past couple of years to find another place, an island or  foreign territory, to put asylum seekers. “There’s a palpable sense of frustration, a sense that Britain owns the world, and why can’t we put unwanted people where we like?” she said, echoing the British government.

Euro-Med Monitor's Michela Pugliese reminded attendees that we are dangerously shifting towards an increasingly selective human rights framework, where it is no longer enough to be just human beings to inherently have human rights, but you need to have something else, whether it is the nationality, sex, religion, or any other status. “It’s like: ‘Tell me who you are, and I will tell you what human rights you do own,’” she said.

This is clear, especially in the asylum and migration framework, as “the refugees in Europe are increasingly traded like commodities, turned into pawns, without any sense of control and agency over their destiny and desires.”