Working Paper: Gaza Seaport, A Windowpane to the World 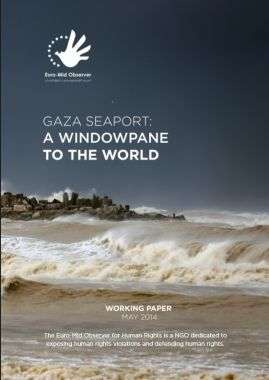 Thousands of Palestinians are struck in miserable limbo unable to leave or easily enter the Gaza Strip, for study abroad, medical care, work or family visits for the past 7 years. Once again, siege and blockade are causing severe shortages of essential supplies from building materials to medicines in Gaza and generating a sense of despair.

Regarding the naval blockade imposed on Gaza by the Israeli navy, the San Remo Manual on International Law applicable to Armed conflicts at sea states that “if the civilian population of the blockaded territory is inadequately provided with food and other objects essential for its survival, the blockading party must provide for free passage of such foodstuffs and other essential supplies, subject to:

(a) the right to prescribe the technical arrangements, including search, under which such passage is permitted; and

(b) the condition that the distribution of such supplies shall be made under the local supervision of a Protecting Power or a humanitarian organization which offers guarantees of impartiality, such as the International Committee of the Red Cross.

The blockading belligerent shall allow the passage of medical supplies for the civilian population or for the wounded and sick members of armed forces, subject to the right to prescribe technical arrangements, including search, under which such passage is permitted”.

The "United Nations Fact Finding Mission on the Gaza Conflict" in its Goldstone Report said that “ The Mission [...] considers that the series of acts that deprive Palestinians in the Gaza Strip of their means of subsistence, employment, housing and water, that deny their freedom of movement and their right to leave and enter their own country, that limit their rights to access a court of law and an effective remedy, could lead a competent court to find that the crime of persecution, a crime against humanity, has been committed”

However, calls from UN agencies and international human rights organizations urging both Israel and Egypt to open their land crossings and ease their restrictions are going unheeded.

Amidst the chronic crisis, the most effective long-term solution has been ignored: re-open Gaza's seaport routes to the outside world. This would provide Palestinians in Gaza with a secure and dignified passageway and free them from dependence on the usually absent goodwill of Israel and Egypt.

This working paper looks at the background to Gaza's sea links and answers the questions whether such a plan is even possible.