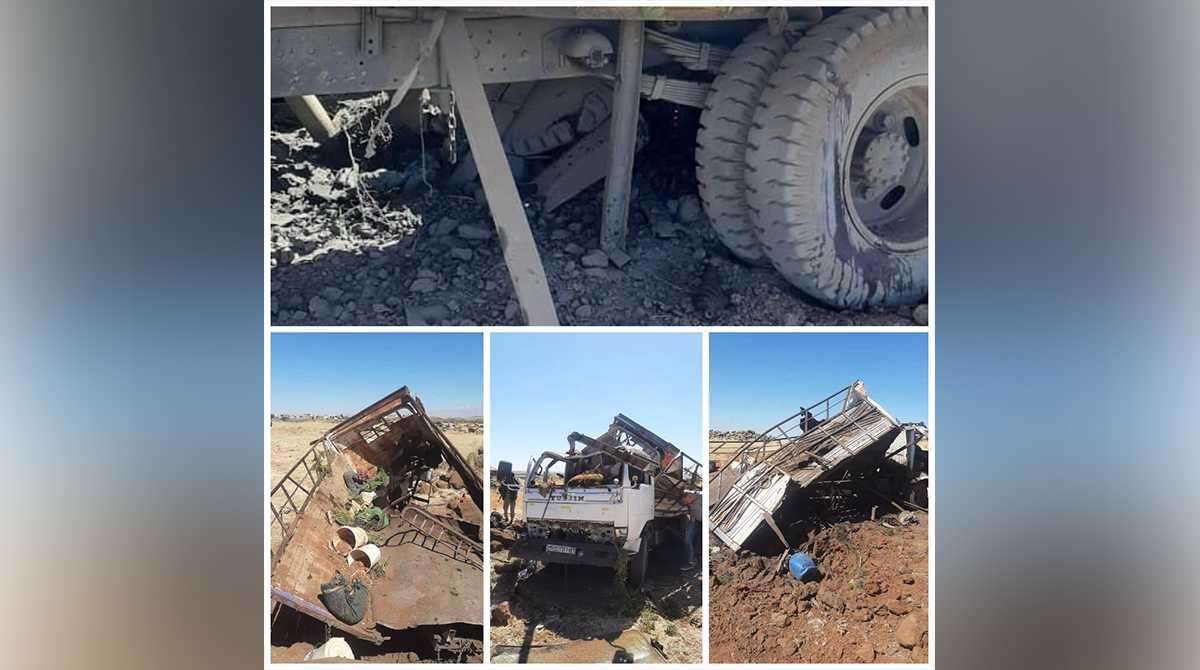 Images of a truck after a mine explosion near the village of Deir al-Adas, northwest of Daraa, Syria - (Social Media)
12 Jun 2022 Syria
Share On Copied
FR | AR

Geneva – Eleven Syrian civilians have been killed and others injured due to a landmine explosion in their vehicle near the Daraa Governorate, southern Syria, Euro-Med Human Rights Monitor expressed on Sunday with deep regret in a statement.

A landmine from the remnants of war exploded Saturday when a pick-up truck carrying more than 35 civilians ran over it. The victims included women and children who were heading to work in agricultural lands near the village of Deir al-Adas, northwest of Daraa. About 25 others were wounded, some with serious injuries.

The incident is a tragic reminder of the deadly dangers posed by landmines in Syria, especially in light of the absence of a national or international program to clear mines in the country, despite their extensive spread due to the conflict that has been going on for more than 11 years.

The Syrian government controls the area in question, but it has not yet been possible to determine who planted the mine since the circumstances surrounding the incident are not clear, given that the map of military control over the area changed years ago.

However, the Syrian government is responsible for neutralizing mines in areas under its control, as it should ensure that residential areas, farms, roads, and all other facilities are free of mines and put warning signs in locations where mines are expected, especially in areas that witnessed armed clashes during the past years.

Since the beginning of this year, Euro-Med Monitor has verified that more than 65 Syrians have been killed, about half of them children, and dozens of others have been injured by the explosion of landmines and ammunition left after the military operations in several Syrian governorates. In some incidents, the victims were siblings or from the same family.

Nour Olwan, Euro-Med Monitor's spokesperson, said: "After controlling an area, the Syrian government's efforts to clear mines or detonate munitions are very limited. And it appears that the government is not interested in harnessing its human and material resources to completely cleanse these areas. This usually causes heavy losses in the lives and properties of civilians upon their return to their homes.”

"The parties to the conflict in Syria have planted, to varying degrees, countless numbers of mines in all areas that have witnessed military operations. But none of them have taken serious measures to clear these mines, or even cooperate to locate and warn of or defuse them."

From March 2011 until the beginning of this year, about 2,800 Syrians were killed, and thousands of others were injured due to landmines and explosive remains of war in most of the Syrian governorates, according to a report by the Syrian Network for Human Rights.

Last April, Euro-Med Monitor released a report warning of the large-scale spread of landmines in Syria and warned of the lack of accurate information about the locations of the mines and efforts to combat them. The report said that this may lead to the continuation of human and material losses resulting from them for a long time, even after the end of the conflict.

The use of landmines is prohibited by a number of international covenants, foremost of which is the 1997 Convention on the Prohibition of the Use, Stockpiling, Production, and Transfer of Anti-Personnel Mines and on Their Destruction (Ottawa Treaty), which Syria has not yet acceded.

The United Nations Mine Action Service (UNMAS) should strengthen its work in Syria, launch a humanitarian program to combat and clear mines in the country, and harness the necessary financial and logistical resources to clear the Syrian governorates of landmines and unexploded ordnance.

All parties to the conflict, led by the Syrian government, should stop using landmines, cooperate in combating them, disclose their locations, and make all efforts to neutralize their danger.