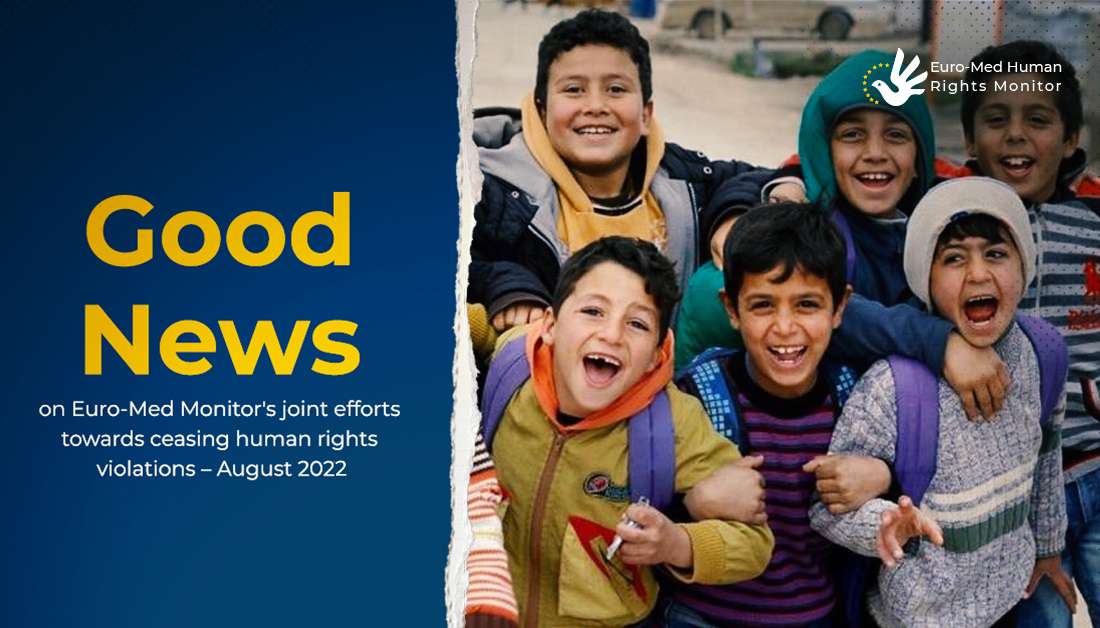 Since the beginning of the last decade, human rights violations have been escalating in the Middle East and North Africa. People have taken to the streets to protest against the dire political and economic conditions, and armed conflicts have ravaged some countries. Governments in the region have used violent tactics to subdue and silence dissenting voices and have systematically targeted political activists and journalists.

In August 2022, repressive regimes continued to target peaceful activists and journalists, suppress popular protests, and restrict public freedoms. In Eastern Europe, the Russian-Ukrainian military conflict claimed the lives of hundreds of civilians and caused the displacement of millions of Ukrainians to neighbouring countries. The crisis exposed the discriminatory double standards of European politicians, officials, journalists, and celebrities, who called for embracing Ukrainian refugees because they share their ethnicity, colour, and religion, unlike asylum seekers and migrants from regions outside Europe.

Last month, our team worked alongside partner organisations and dozens of regional and international organisations to generate real change by speaking to decision-makers about practises and methodologies that must be addressed, reformed, or abolished. We also harnessed the power of social media to virtually engage the public regarding issues that affect their rights, as well as human dignity as a whole.

On 26 August, Dutch authorities relocated hundreds of refugees who were sleeping out in the open in deplorable humanitarian conditions to an asylum seeker shelter.

In July, Euro-Med Monitor had written to the Dutch Minister of Migration, urging him to take immediate action to ensure those asylum seekers stranded in the open received shelter, food, health care, and other basic necessities.

Due to strong criticism, two members of a Danish government committee that had proposed a headscarf ban in primary schools backed down on 29 August.

On 26 August, Euro-Med Monitor had urged the Danish government not to implement the committee’s discriminatory recommendations regarding headscarves, emphasising that the proposed ban was entirely based on the unethical and prejudiced views of people of Islamic origin in Denmark, fueling discrimination, racism, and xenophobia.

In August, Saudi authorities released seven prisoners of conscience who had been imprisoned on false charges.

For years, Euro-Med Monitor has urged Saudi authorities to release prisoners of conscience and has consistently launched campaigns, alongside its partners, to put pressure on authorities to end arbitrary detention and respect citizens’ right to free expression.

On 3 August, the Yemeni government and the Houthi group agreed to extend the truce in Yemen for another two months, until 3 October 2022.

Throughout the conflict, Euro-Med Monitor and other human rights organisations have urged all parties in Yemen to end the armed conflict, keep civilians out of all military operations, and allow relief organisations to operate freely and safely in all regions of Yemen.

In June, Euro-Med Monitor had documented Habib’s deteriorating health and urged Bahraini authorities to release him, as well as all other prisoners of conscience in the Kingdom.

On 31 August, Palestinian detainee Khalil Awawdeh suspended his 170-day hunger strike, after reaching an agreement with Israeli authorities to end his administrative detention and be released in early October 2022.

Earlier in August, Euro-Med Monitor documented Awawdeh’s rapid deterioration of health and warned that time was running out to save him, calling for his immediate release.

[Palestinian Territories: Detainee Khalil Awawdeh suffers from acute dyspnea and time is running out to save him]

In early August, the Syrian regime released several detainees as part of a presidential pardon.

Over the years, Euro-Med Monitor and many human rights organisations have documented the horrific violations to which detainees in Syrian regime prisons are subjected, and have called on all concerned parties to exert maximum pressure on the regime to release all prisoners of conscience and end human rights violations.