A steadfast, hopeful march: Why advocating for human rights is still fundamental 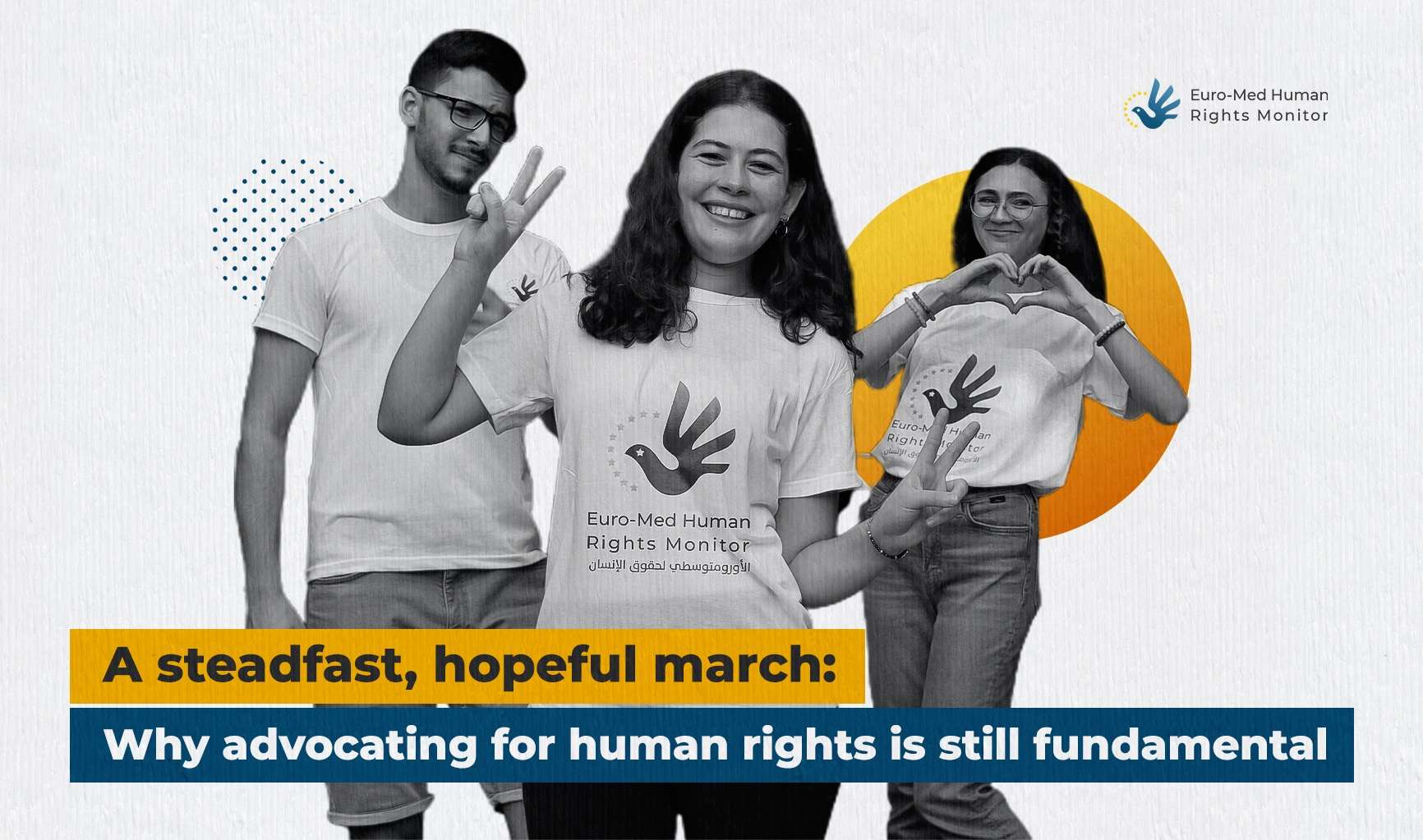 It is not rare for human rights defenders to question their own actions and core beliefs according to progresses seen, which are often small, and systemic inequalities witnessed, which are often many. Yet the history of human rights, and of past and present social movements of grassroots resistance, is marked by great perseverance. An everlasting march from the margins of history books to demanding fundamental rights and freedoms for all, the fight for human rights never ceases to move forward.

The contemporary human rights movement can be traced back to the mid-1940s and the aftermath of World War I and II. A dark and hopeless period for humanity, the era of the two world wars was defined by bloodshed, atomic bombings, and genocides. It also led to the blooming of the human rights discourse, however, with the adoption of the Charter of the United Nations in the summer of 1945 and creation the following year of the Commission on Human Rights, to remember the abstract statements of post-war optimism and goodwill and translate them into legally binding treaties.

Indeed, the first task of the Commission on Human Rights was to draft a declaration of principles, which in 1948 became the Universal Declaration of Human Rights. Although most of Africa, much of Asia, and parts of the Americas were still under colonial rule at the time—the epitome of inequality—the globally endorsed Universal Declaration had votes from 14 Western states, 19 Latin American states, and 15 states from Africa and Asia. It is often claimed that the declaration is not enough, as it is not a legally binding treaty; even so, it has been and remains a vital and living document: the first international treaty of ethical values to be adopted by humanity as a whole, an indispensable source for the legally binding international agreements and instruments developed after it, and an inspiration to expand the body of international human rights law.

The Universal Declaration of Human Rights can be viewed as a metaphor for the human rights path itself: slow but steadfast, intersectional, people-centred, hopeful.

We have come a very long way from the early 1940s, when even genocide was not legally prohibited, but fundamental rights continue to be violated on an alarming scale across the globe. A substantial double standard, the legacy of colonial rule, is still influencing the international arena; some states are seen as terrorist rogue nations compromising their full legitimacy, while other (primarily Western) states that similarly violate human rights systematically are not even slightly considered as such. The extensive and admirable body of international human rights law is not matched by comparably strong and equal international implementation procedures, starting with the veto power within the UN Security Council, or the very existence of five permanent members in such a powerful international body.

Eventually, the application of international human rights obligations became and remains almost entirely up to individual nations, but the existence of legally binding treaties signed and ratified by states does not automatically mean that such states will respect, protect, and fulfill the treaties. Therefore, human rights’ advocacy, activism, and grassroots resistance are of crucial importance in terms of developing a vigilant, aware, and united civil society. Too often the Universal Declaration of Human Rights is seen as an abstract tool, or is not understood by the people it was designed to protect, but such a document is meaningful only if employed on a daily basis.

The fullness of human rights will not be achieved by states and institutions, bodies with top-down approaches to monitoring, and international courts and tribunals alone, but only through multiple overlapping and coordinated mechanisms that operate at the international, national, and local levels and meaningfully engage civil society as well. Effective safeguarding of human rights includes not only retrospective complaint mechanisms and reparations, but also forward-looking efforts to prevent violations and cultivate respect for human rights. Indeed, fostering a culture of human rights “from the bottom up” can give important impetus to the adoption and enforcement of legal standards by governments “from the top down”.

People’s eyes and ears are the first and most important witnesses of violations they or others are subjected to, and their voices can be used as vital tools when they themselves are protected and others are not.

People—as members of non-governmental organisations, participants in social movements, associations, or simply as citizens—play a frontline role in protecting and promoting the rights of the Universal Declaration. Individuals can amplify human rights accountability by drawing attention to shortcomings in the implementation of specific rights, by echoing those who have been left at the margins, and by “naming and shaming” governments that are guilty of violations.

Human rights advocacy is fundamental to provide early warning of emerging problems. Activists keep enduring concerns alive and visible in the public domain to prevent conditions from deteriorating further, raise awareness and mobilise domestic pressure on key governments, help other people learn to feel empathy and outrage and eventually join the fight, allow newcomers to aid in protecting veteran human rights defenders from repercussions by speaking out for those who spoke out first, and support the power and agency of individuals and communities whose rights have been violated or are at risk—essentially, they cultivate social justice.

Today, I will take to the streets in Rome with over 40 international human rights’ associations and civil society organisations to protest the renewal of the Memorandum of Understanding between Italy and Libya—an agreement that provides economic support to the so-called Libyan coast guards, and results in public funds spent on pushbacks, arbitrary detentions, violence, exploitation, and additional types of inhuman treatment faced by thousands of migrant and refugee women, men, and children trapped in Libyan detention centres.

It is not always the crowded demonstration, the chanting, the detailed report, or the successful petition campaign that persuades governments to change their actions and redress their violations, but it is still fundamental to come together and speak out against impunity. The lack of accountability is what facilitates the recurrence of human rights violations, as the lack of political will to address the root causes allows for the repetition of the same violent patterns. As well as causing immense suffering to victims by preventing the recognition and reparation of the physical, social, and psychological harm done to them, impunity has profound and insidious consequences at all levels of society, as it discourages people from speaking up and diminishes civic space.

It is fundamental for us—citizens, people, and members of civil society—to engage in human rights advocacy as a form of grassroots resistance, to show that we care about our rights, that we value our civic space, and that we will keep marching and we are powerful. Among the fundamental rights and freedoms inherent to all human beings and enshrined in international human rights law, the right to defend human rights is indeed what ultimately protects our very ability to resist and condemn those in power who do not care about justice.