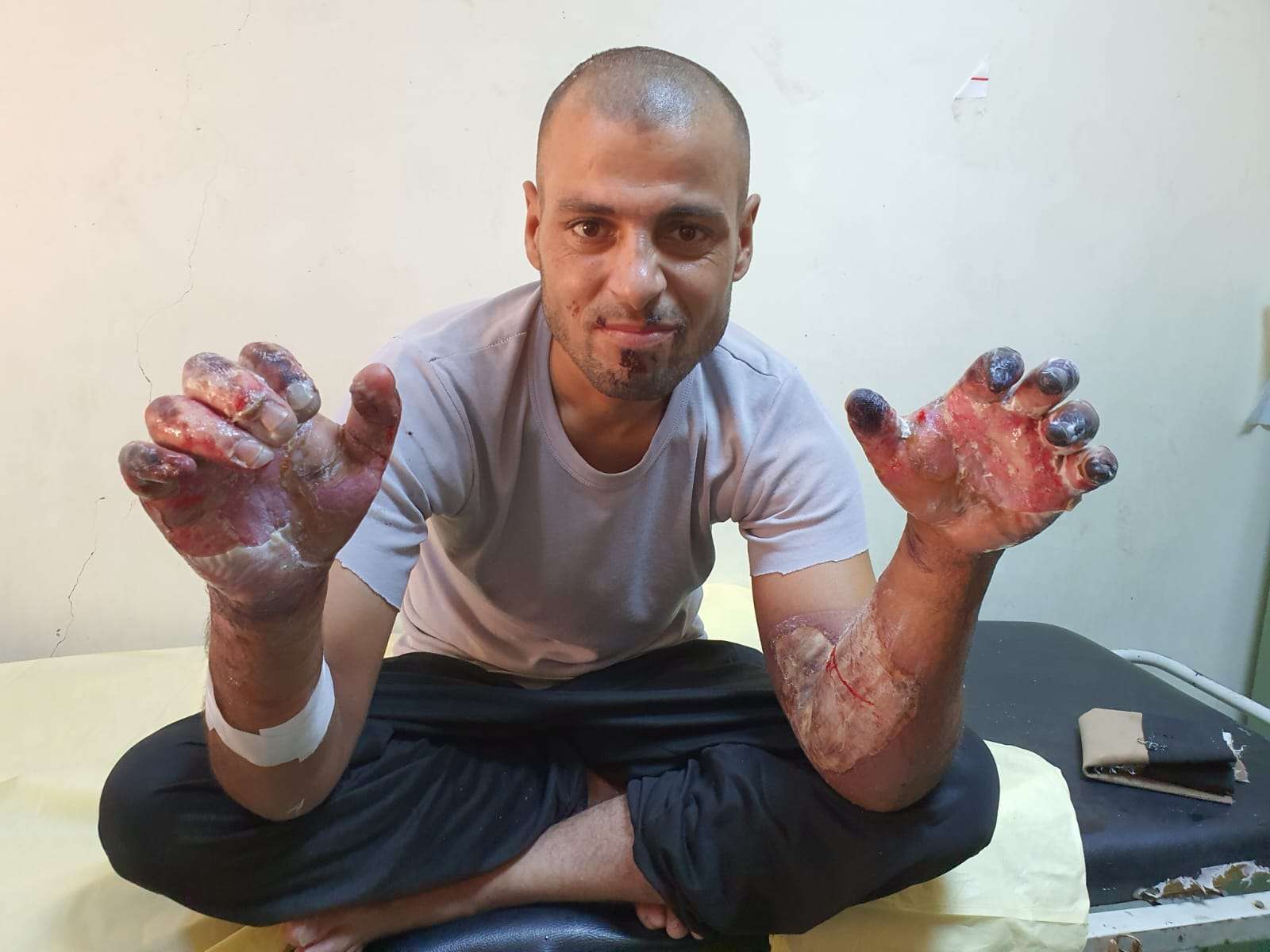 Hassan al-Taie after being detained and tortured at the Intelligence Service headquarters in Kirkuk Governorate, northern Iraq
22 Nov 2022 Iraq
Share On Copied
AR

Geneva – Iraq’s new Prime Minister Mohammed al-Sudani must launch an independent investigation into the detention and torture of an Iraqi citizen in one of the country’s official security facilities, as well as ensure that the perpetrators do not receive impunity, Euro-Med Monitor said in a statement.

Euro-Med Monitor documented security forces’ detention and torture of Hassan al-Taie at the Intelligence Service headquarters in Kirkuk Governorate, northern Iraq—abuses that have caused the young man to suffer severe physical deformities as well as psychological complications that may be long-term. Following his torture, al-Taie’s family was forced to sign a “clan reconciliation agreement” which allowed the perpetrators to avoid punishment.

The al-Taie incident is a perfect example of torture in Iraq, as detainees in official prisons are subjected to torture and other forms of cruel and degrading treatment, in violation of Iraq’s obligations under the UN Convention against Torture, which it ratified in 2008, and in the absence of serious government measures to curtail these practises.

Omar Alajlouni, a legal researcher at Euro-Med Monitor, said, “What happened to Hassan al-Taie exemplifies the reality of Iraq’s justice system, beginning with the fabrication of charges, physical and psychological torture, and coerced confessions, and ending with victims being forced to compromise and give the perpetrators impunity.”

In a testimony to the Euro-Med Monitor team, Hassan al-Taie said, “It all started on 15 June 2021 while I was working for a security company in Kirkuk’s industrial district. A man claiming to be affiliated with the Popular Mobilisation Forces (PMF) attempted to break into one of the warehouses I had been assigned to guard. I stopped him, so he wrote down my full name and left.

“On 21 June 2021, an Iraqi federal police force comprised of the 3rd and 5th battalions stopped me and took me into custody; during the investigation, the person I had stopped [in June] arrived with two officers and began questioning me. It turned out he had filed a complaint against me without mentioning that he attempted to break into the warehouse, and accused me of terrorism and working for the ISIL militia”, al-Taie added.

“They returned me into custody, and my father filed a complaint against the officers for delaying my appearance before the judge to give a statement. They took me back to the examining magistrate three days later, and I was able to give my statement 21 days after my arrest.”

Regarding his torture, al-Taie told Euro-Med Monitor: “After giving my statement before the judge, I was detained for another 16 days, bringing my total number of detention days to 37. During this time I was subjected to severe forms of torture such as electrocution, suffocation, continued handcuffing, and suspension in the centre’s outer courtyard for several days under the scorching June sun. This caused severe burns to my hands and other parts of my body, resulting in the amputation of multiple fingers. It was the investigation officers who tortured me, as well as the member of the Popular Mobilisation Forces who filed the malicious complaint against me.

“After I was taken to the hospital, one of the officers, Lieutenant-Colonel Khalil, approached the guards and told them that if I wanted to escape, they should let me so that that the charges against me could be proven true”, added al-Taie. On the second day, he said, First Lieutenant Mohammed approached him and said the judge would come see him tomorrow, and that if al-Taie did not complain to him, Mohammed would arrange for his release from prison and a social welfare salary. Before leaving, according to al-Taie, Mohammed said in a threatening tone, “Do not tell on the officers!”

“Torture caused deformities in my right forearm, head, and other areas of my body”, stated al-Taie. “I spent five months and 12 days in the hospital undergoing four surgeries in which my fingers were amputated.” Euro-Med Monitor reviewed several photos and additional documents such as medical reports about his condition that confirmed al-Taie’s severe injuries—particularly his burns—were a result of torture.

According to a medical report sent from the Azadi Teaching Hospital to the Federal Police Intelligence Directorate (The Investigative Commission - Kirkuk) on 8 August 2021, the victim suffered from “third-degree burns to the hands, forearms and scalp” that required “a cleaning procedure as well as the amputation of some left hand fingers”, and noted that al-Taie’s condition had become too advanced due to a lack of previous surgery, which had resulted in additional complications.

The hospital sent the final medical report to the Intelligence Directorate on 30 October 2021, stating that the detainee had “third-degree burns to the hands and scalp” and had undergone “necessary surgeries, including the amputation of his left hand. He has severe deformities in his right hand and sloughing in his scalp and left elbow as a result of being burned.”

State officers not only physically tortured al-Taie, but used organised tactics of psychological intimidation against him. One officer said to him: “We will drive you insane, sentence you to 20 years in prison, or leave you with a permanent disability that will make you remember us for the rest of your life.” Another officer threatened to detain al-Taie’s wife as a form of psychological pressure to force him to “confess to the fabricated charges.”

Al-Taie told the Euro-Med Monitor team that he had filed a complaint with Iraqi judicial authorities against the officers who had tortured him, but that they have not been subject to any disciplinary or criminal measures.

Sentenced to six years in prison on 19 January 2022 based on the fabricated charges against him, al-Taie was able to appeal the decision, and was granted a release order on 22 March 2022. However, due to another complaint based on the same terrorism-related allegations, he has not been released.

Meanwhile, al-Taie’s father informed the head of the Kirkuk court of flawed legal procedures and has filed a complaint against the offending officers and primary judge, alleging that his son was tortured and coerced to stay silent on the fabricated charges in both cases against him. After his father’s complaint, al-Taie remained in detention until an officer suggested that they hold a clan reconciliation session with the officers involved in his torture; his family was then forced to attend a session with the officers’ clans, and al-Taie was released from prison only seven days later, on 28 June 2022.

On 15 November, al-Sudani instructed his human rights adviser to follow up on al-Taie’s case. According to the new prime minister, a government delegation visited al-Taie a few days later and listened to his account of what had happened, but made no concrete promises to him.

Speaking to Euro-Med Monitor, al-Taie concluded: “I am frustrated with the Iraqi justice system and attempting to hold those involved accountable. All I ask for today is asylum in a country that respects my dignity, far away from fabricated charges and torture.”

Euro-Med Monitor called on the Iraqi government to launch an independent investigation into the detention and torture of Hassan al-Taie, and hold those responsible for his arbitrary detention, torture, and various forms of intimidation accountable, emphasising the importance of focusing on criminal accountability rather than administrative procedures only.

The Iraqi government must fulfil its obligations under the Convention Against Torture by taking serious and deterrent measures to end the policy of systematic torture in prisons, dismantle the system of impunity, hold those responsible accountable, and bring justice to the victims.