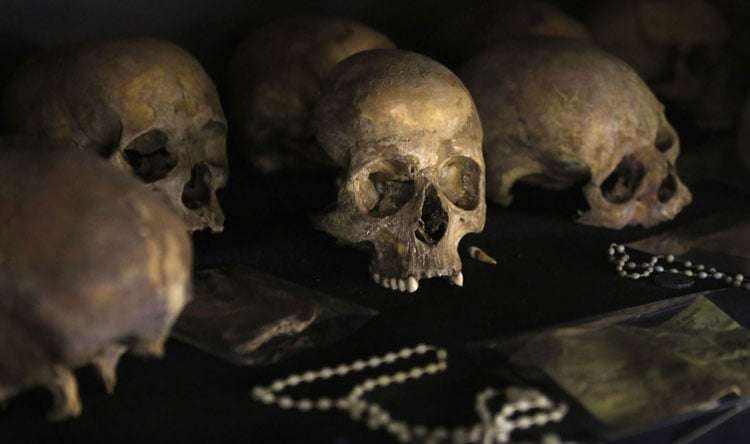 Geneva - Human remains from the colonial era being exhibited and auctioned in Belgium recently are evidence of the extent to which Europe’s brutal colonial past is also its present, warned Euro-Med Human Rights Monitor in a statement today urging the Belgian government to comprehensively and critically confront its colonial legacy.

Human remains of “African” individuals from the Congo Free State period (1885-1908)—when Belgian coloniser and king Leopold II established the state of Congo as his personal possession—were recently put up for auction in Uccle, one of the 19 municipalities of the Brussels-Capital Region. For a price of between 750 and 1000 euros, the Vanderkindere auction house offered “Lot n. °405”, described as a “lot of three human skulls” and classified as “curiosa” (i.e. odd, bizarre, intriguing).

Removed recently from the website and related auction, Vanderkindere now provides in its place a message of apology: “We in no way condone the suffering and humiliation suffered by the populations who have been victims of these colonial acts. We once again offer our deepest regrets to anyone who has been hurt and harmed by the sale of this lot.”

“Yet the very fact that such a ‘lot’ existed, was estimated, priced, and presented as an artistic piece of collection to be exhibited and sold, is extremely grievous and significative of a much wider context of dehumanisation, discrimination, and impunity for a brutal colonial past never really and comprehensively acknowledged,” said Michela Pugliese, Migration and Asylum Researcher at Euro-Med Monitor.

King Philippe of Belgium openly expressed regret in both 2020 and 2022 for the brutalities inflicted on the Congolese people during the colonial dominion, but without giving a formal apology, nor a promise to pay financial reparations for the atrocities committed—the lives lost as well as the natural and cultural resources stolen. The Vanderkindere sale could be organised because no law prohibited it. On the part of the cabinet of Thomas Dermine, State Secretary for Scientific Policy and a member of the Socialist Party, it was confirmed that since the skulls belonged to private owners and not to a public institution, no intervention from the state was possible.

Added Pugliese: “The colonial past is far from being past if the spectacularisation of non-white corpses is still conceivable and acceptable—if today in a European country, for example, it is still possible to dehumanise Black people to the point of allowing the merchandising and purchasing of their corpses as something ‘bizarre’ to stuff the private collections of rich, and probably white, people.”

Also featured on the website of the Drouot Group, located in the heart of Paris and representing “the largest public auction house in the world since 1852”, the description of this “sale” in the Group’s own words was: “Lot of three human skulls: a cannibalistic Bangala skull with pointed incisors, a skull of the Arab chief Muine Mohara killed by Sergeant Cassart in August on 9 January 1893 and decorated with a frontal jewel, and a fragment of skull collected at the ‘Fig Tree of Death’ in the village of Bombia in the province of Mongala by doctor Louis Laurent on 5 May 5 1894. Bearing old collector’s labels. Provenance: former collection of Doctor Louis Laurent in Namur. Period: 19th century.” Notably, there is not a single mention in this description of the Belgian colonial legacy.

The auction was initially scheduled for Wednesday 14 December 2022, and the remains were intended to be exhibited at the auction house a few days prior, mixed tellingly with objects such as bags, jewelry, paintings, and even silverware, and without the slightest consideration of the meaning of such an action and of the dignity of those three human beings. This is the umpteenth expression of the vulgar dehumanisation resulting from colonisation, which is still perpetuated today as the violence and white supremacism of the colonial system are reproduced again and again.

As expressed by the Belgian Collectif Mémoire Coloniale et Lutte contre les Discriminations (or the Colonial Memory and Fight Against Discrimination Collective), “This infamous sale once again raises the absolute necessity for the Belgian state to operate a global political effort, coordinated at all levels of power [and] inscribed in the long term on colonisation as a historical period and the consequences its effects still have today.”

Because any manifestation of superiority based on racial differentiation is scientifically unsound, morally condemnable, socially unjust, and dangerous, and there is no justification for racial discrimination in any form, Euro-Med Human Rights Monitor urges the Belgian government to locate all the remains of African people linked to the colonial period and establish a clear legal framework to provide for the prohibition of any act of private ownership of human remains, and for their maintenance within the Belgian public domain in an appropriate and dignified setting, if repatriation to their countries of origin is not requested by the communities of the countries concerned following thorough consultation with them. To critically and comprehensively confront its colonial legacy, Belgium must acknowledge not only the past systematic and brutal human rights violations inflicted on colonised populations, but also the ongoing repeated violations arising from a colonial system of domination that has yet to be fully abolished.