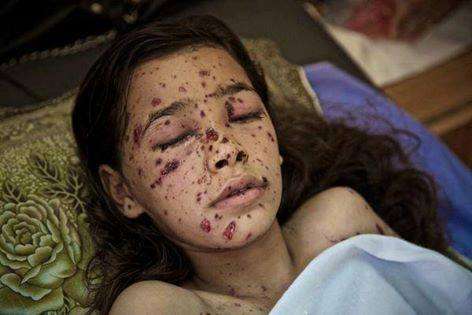 Geneva- The number of victims of the Israeli attack on the besieged Gaza Strip has killed more than 1,800 and injured more than 9,300. During the four weeks of Israel’s attack, a number of doctors have expressed their disapproval of the nature of casualties, with a group that met with the Euro-Mid Observer in Gaza reporting “extraordinarily dangerous” injuries. The doctors reported having to deal with numerous casualties who arrived with severed legs with signs of intense heat at the point of amputation without trace of shrapnel fragments. They further stated that they noticed deep burns that in certain cases reached the bone as well as tissue causing serious hemorrhaging in the affected limb.

Mira Bashara, Researcher at Euro-Med Monitor’s Legal Department stated that it is believed that the weapons causing such injuries are known as “DIME” (Dense Inert Metal Explosive), a type of experimental weapon that explodes with a mixture of poison used in deadly waves directly upon the bombed area.

Doctors have confirmed that particles of this weapon cannot be detected by X-ray, thereby making it forbidden according to the Euro-Med Monitor under Protocol One of the Convention on Certain Conventional Weapons regarding undetectable shrapnel of 1980 of which Israel is a signatory and therefore must comply with.

The Euro-Med Monitor has published preliminary statistics regarding the outcome of the Israeli attack on the besieged Gaza Strip as of midnight on its 27th day. As such, the number of victims on Sunday (day 27) reached 90, including 15 children and 20 women, bringing the total number of deaths to 1800 according to statistics, among them 401 children and 245 women.

Israeli Armed Forces continue to target entire families, with eight people dead and more than 15 wounded one hour before the end of the day due to Israeli air raids on the house of Abu Bilal Name in the vicinity of Al-Tawba Mosque in the Jabalia refugee camp in the north of the Gaza Strip. Preceding this, ten members of the Al-Ghoul family were killed and twenty injured in the bombing of their home in the Tel Al-Sultan neighbourhood in Rafah.

As a result of the heavy bombardment of the Gaza Strip, those wounded on day 27 of the attack numbered 288, with their injuries ranging from mild, moderate and serious wounds among them 38 children and 54 women, bringing the number of casualties since the beginning of the attack to 9365, including 2805 children and 1868 women.

On Sunday, the Israeli Army carried out 387 attacks; including 112 shells, 60 rockets from the Marine Corps, and 215 artillery shells, raising the number of military attacks since the beginning of the offensive on Gaza to 58,870, including 7079 missile attacks, 15546 naval shells, and 36,245 artillery shells.

Israeli Armed Forces have further continued to target houses and civilian establishments at a rate that increases with every day that passes of the ongoing attack.Euro-Med Monitor has recorded a destruction rate of three complete houses every hour since the beginning of the bombardment, with statistics showing that on Sunday 403 houses were damaged, 49 completely razed and 354 partially destroyed bringing the number of houses demolished since the onslaught to 10,483; 1705 completely and 8778 partially.

Places of worship have also been targeted, with Israel Forces intentionally targeting mosques with the continuation of the attack. In this regard, the Euro-Med Monitor reported on Sunday the targeting of nine mosques by Israeli warplanes, three of which were completely destroyed and six partially destroyed, thereby bringing the number of mosques targeted since the beginning of the attack to 127 with 40 completely razed and two churches damaged as a result of the Israeli bombardment.

Additionally, the dead have also been targeted with 10 Muslim and one Christian cemetery damaged as a result of Israeli military strikes.

The number of schools damaged since the start of the offensive has reached close to 200 in which approximately 152,000 pupils study at.

The Ministry of Health has stated that since the beginning of the attack it has closed 44 primary care centres of a total of 55 in addition to tens of other health centres due to direct targeting and people’s inability to reach them.

Such massacring and targeting comes in light of catastrophic living and economic conditions in Gaza, with Euro-Mid observing the total destruction of 243 commercial and industrial interests causing USD 800,000,000 in economic losses to the Palestinians, including USD 500,000,000 of direct losses and the remainder indirect losses.

Despite international condemnation, Israeli Forces have continued to target and massacre those in UNRWA facilities, bombing School “A” in Rafah on Sunday afternoon and leading to the death of 10 displaced people and injuring more than 30 others in an attack that comes as the third of similar incidents on two schools in Beit Hanoun and Beit Lahia. This latest attack brings the number of schools directly targeted to eight, and UNRWA facilities damaged to 100.

Euro-Med Monitor has confirmed the Israeli Army’s ongoing use of random artillery shelling to target border areas, forcing thousands to be displaced. As of Saturday evening in the besieged Gaza Strip, there are more than 475,000 displaced people, some of whom have been forced to flee as a result of air raids carried out on their homes, with about half escaping to tens of UNRWA schools that are no more secure. As such, two schools have been directly targeted leading to the killing and injuring of dozens. Since the Israeli Army’s announcement of its ground operation, the Gaza Strip has been subjected to intense and random bombing from both aircraft and naval warships, primarily targeting civilian homes.