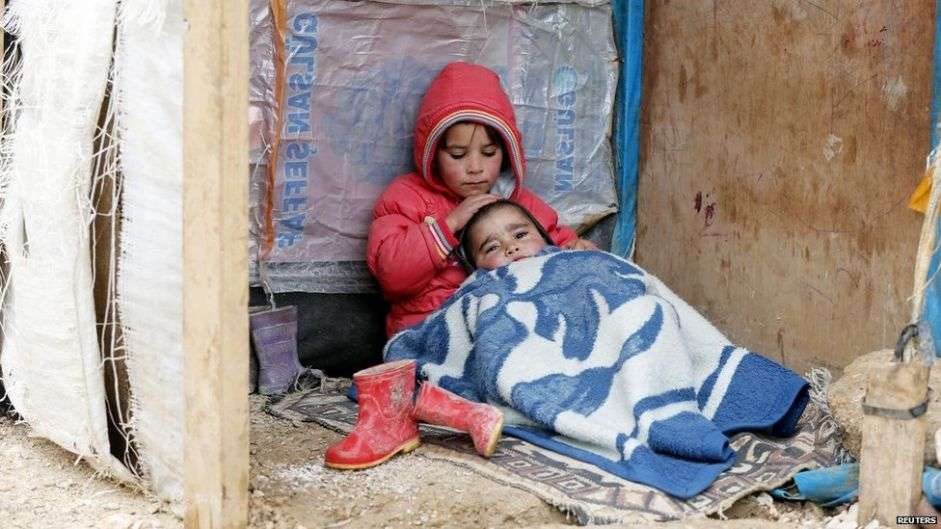 The UN has expressed concern over new Lebanese restrictions on Syrian refugees aimed at slowing the influx of asylum seekers escaping civil war. The UN wants the government to clarify whether the "most vulnerable refugees" can still gain access to Lebanon.

Travel between the two countries was previously largely unrestricted, but now Syrians will have to obtain a visa. There are more than a million Syrians in Lebanon, and a senior minister says there is "no more capacity". "We have enough. There's no capacity anymore to host more displaced,'' Interior Minister Nohad Machnouk said at a news conference on Monday.

Millions of Syrians have been displaced by the civil war as rebel forces try to oust President Bashar al-Assad. Activists say more than 76,000 people were killed in Syria's conflict in 2014, including almost 18,000 civilians. 'Limited and exceptional' Under the new measures, Syrians wishing to enter Lebanon will have to fulfil certain criteria in order to be granted a visa at the border. Previously, Syrians could automatically stay in Lebanon for up to six months. Khalil Jebara, an adviser to Mr Machnouk, told the BBC that Lebanon "will only allow refugees under very limited and exceptional cases." Lawmaker Basem Shabb told the BBC that the government had done "all that it could" to support Syrian refugees.

"But it's also clear to most Lebanese that this situation cannot continue... because it will affect not only the Lebanese but finally it will affect the Syrian refugees in Lebanon if Lebanon descends into chaos." There are large numbers of Syrians already in Lebanon who are not registered as refugees. Government officials have said those already in the country would not be forcibly expelled. A spokesman for the UN refugee agency (UNHCR) in Lebanon, Ron Redmond, said that over the past six to eight months several measures had already reduced the number of people seeking registration as refugees.

However, the UN had worked out a system with the government to enable the most vulnerable to still get through, he said. "The government says that it will allow those extreme humanitarian cases access but it is not covered in these announcements that have come out the last few days," Mr Redmond told the BBC. Mr Redmond added: "We just want something official from the government that outlines how the system works now... so that we can continue to ensure that the most vulnerable refugees can get through.

"The government says that will be forthcoming so we are just waiting for that - hoping we get it soon." A Lebanese security official, speaking on condition of anonymity, told AP news agency that urgent humanitarian cases would still be allowed in, and that Syrians could make use of a medical care category and a 48-hour visa that would let them apply for asylum at foreign embassies.

Lebanon, which shares a border with Syria, is one of the countries most affected by the large numbers of refugees. The small town of Mashha has 6,500 residents. Now, 3,500 refugees have made it their home too. As elsewhere in Lebanon, rents are rising, wages are falling and Lebanese complain they can't find jobs. "I used to earn $1,000 a month," one resident told me. "They sacked me, and hired four Syrians instead." Those resentments boiled over a few weeks ago, when an angry mob burned down a new camp built by an international charity. And Mashha is Sunni, like the bulk of the refugees. Elsewhere in Shia and Christian areas the influx is widening sectarian and religious divisions.

Behind the economic hardships lie the fears many Lebanese have, that the presence of more than a million refugees in the small fragile country might eventually trigger a renewed civil war. The size of the refugee population in Lebanon is putting a huge strain on the country's infrastructure and resources. While officially there are some 1.1 million Syrians living in the country, the Lebanese government says the actual number is about 1.6 million.

The latest UNHCR figures show a total of 3.2m Syrians registered as refugees in Lebanon and elsewhere. The Syrian uprising began with protests against Bashar al-Assad's rule in 2011 and degenerated into civil war a year later. The rise of Islamist groups has added to the refugee problem.