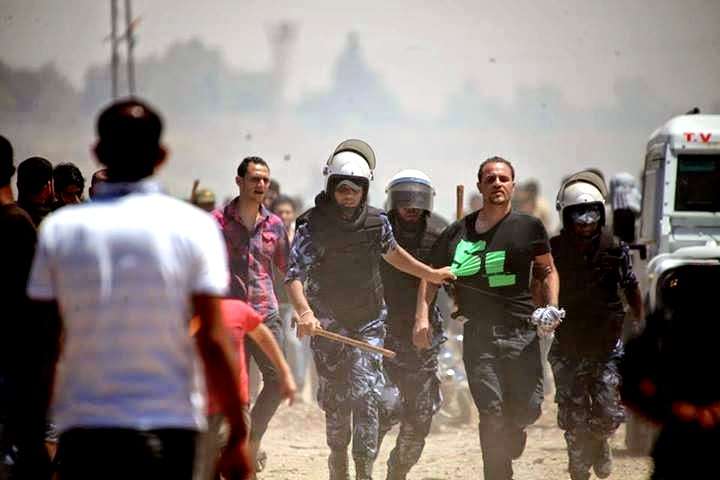 Geneva - Security services in Gaza have dispersed demonstrations and peaceful assembly, while allowing some parties, which only serve the political vision of the security services in the Gaza government, to demonstrate without any hindrances, condemns Euro-Med Monitor.

On Friday evening, January 23, 2015, security forces arrested youth activist, Tariq Al-Farra, who was working in the context of a popular lobbying and advocacy campaign, titled" Time for Elections" which demands Palestinian political factions to set a date for the general elections in the Palestinian Territories.

Al-Farra posted on his Facebook account, that he and his colleagues gave a general notice to the Gaza police chief prior to holding the silent vigil under the name of a Popular Lobby and advocacy Campaign/ "Time for Elections". However, the peaceful stand which was to be parallel to similar events in the West Bank, was rejected by the security services in Gaza; activist Al-Farra, one of the main organizers, was also arrested.

On January 13 of this year, Gaza security services broke up a protest rally organized by a number of journalists before the French Center in protest against offensive drawings of French newspaper to Islamic Prophet Muhammad. One of stand organizers, journalist Ayman al-Alul, was informed that the protest was stopped under the pretext of "not having a permit". He also was informed to attend an investigation at 10:00 a.m in the next day, in which he was asked to sign a pledge not to organize any events without prior permission from the government.

Earlier this month, some activists and cadres from the Palestinian Fatah faction filed a complaint to Euro-Med Monitor about receiving threats and warning messages about any gathering to be held, regarding commemorating the 52nd anniversary of the establishment of Fatah. The Fatah activists and cadres were threatened to be held responsible for any blood that might be shed if they do so. On the other hand, the security services in Gaza did not investigate any background of these threats or those responsible.

Euro-Med Monitor calls on the security services in the Gaza Strip to respect the right to peaceful protest, stop the policy of silencing mouths, and maintain the right freedom of opinion and expression in the Strip. Euro-Mid pointed out that the prevention of peaceful demonstration and the continuation of arbitrary detention on the background of acts and activities protected by the Palestinian law, is a clear violation of the freedom of opinion and expression.