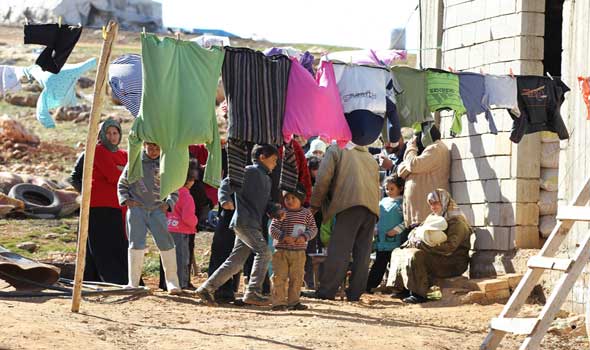 New Report: Palestinian Refugees in Lebanon Must Not be Forgotten on World Refugee Day

Geneva - As World Refugee Day approaches, reports from organizations and in the media are focusing on people fleeing Syria, Myanmar and other acute hot spots. However, while these do indeed represent legitimate emergencies, there is an almost total lack of attention to or dialogue about the 5 million Palestinians living in a state of perpetual limbo in the Occupied Territories or as refugees elsewhere.

“This longest-in-history warehousing of human beings, more than 60 years, is a moral travesty and it is time to put it to an end,” says a new report from the Euro-Mediterranean Monitor for Human Rights (Euro-Med Monitor) to be issued next week.

The body charged with assisting displaced Palestinians, the UN Relief and Works Agency (UNRWA), announced this month that it is facing a shortfall in funding of US$100 million for core activities—such as schools for half a million children. As a result, stipends for rent assistance, for example, are being cut, even though UNRWA aid is a desperately needed source of income for many Palestinian refugees. Protests have broken out both in the Gaza Strip and Lebanon, where approximately 300,000 Palestinians live.

The Euro-Med Monitor report, titled “The Refugee Tsunami,” focuses on Lebanon because according to the UN High Commissioner of Refugees (UNHCR), it has more refugees per 1,000 inhabitants (257) than any other country (the “runner up,” Jordan, is far behind, at 114). It also is home to the oldest and largest population of what the agency calls “protracted” refugees (a population of more than 25,000 exiled from their country of origin for more than five years).

Where Palestinians ended up following the 1948 Nakba (displacement following the creation of Israel) has had a significant impact on their wellbeing and that of their descendants years later. Compared to Palestinian refugees elsewhere, those in Lebanon live with a unique degree of political, economic and social exclusion. More than half of the Palestinian refugees living in Lebanon have no other choice but to live in densely crowded and poorly served camps, with the remainder in 27 “gatherings.” They are not allowed to own property and must live with numerous restrictions and social norms that severely limit where they go to school, work and get health care (if they can at all). These restrictions are a clear violation of international law, including the International Covenant on Economic, Social and Cultural Rights; International Convention on the Elimination of Racial Discrimination; and the Convention on the Rights of the Child—all treaties signed by Lebanon.

UN General Assembly Resolution 194 states that refugees wishing to return to their homes and live in peace should be permitted to do so at the earliest practicable date, and that compensation should be paid for the property of those choosing not to return and for the loss of or damage to that property. In its report, Euro-Med Monitor calls for the UN and its member countries to finally honor this resolution, demand that Israel offer a fair response and, if it is not forthcoming, impose sanctions.

Meanwhile, however, the Palestinians in Lebanon must be given basic human rights, adds Euro-Med Monitor. Tawteen—the naturalization of Palestinians in Lebanon—has been explicitly prohibited by the Lebanese constitution since the Taif Agreement of 1989. However, Palestinian groups throughout the country are virtually unanimous in agreeing they would forego citizenship in return for civil rights such as the freedom to work in every profession and to be treated and compensated in line with Lebanese employees.

Surveys conducted by the International Labor Organization estimate that Palestinian refugees in Lebanon contribute more than US$300 million a year to the Lebanese economy, with a particular benefit in rural areas, where most Palestinians live. This is in spite of the strict limitations that suppress their earning potential.

“It is time for the international community to offer the government of Lebanon the support it needs to do what is morally right: allow the Palestinians to live productive, fulfilled lives as they wait for the status they deserve in their rightful homeland,” the report concludes.