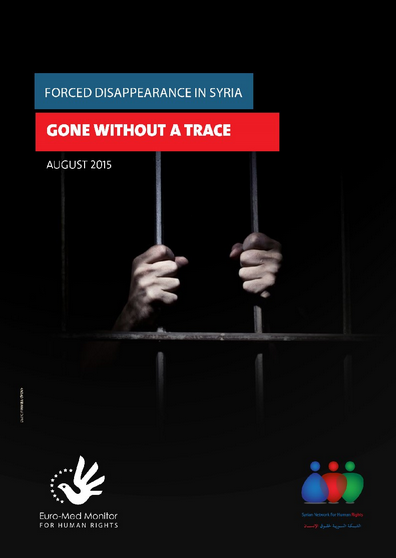 A new report titled, "Gone Without a Trace: Victims of Forced Disappearance in Syria," documents an alarming rise in abductions of Syrian citizens, including women and children. According to the report, jointly issued by the Syrian Network for Human Rights, London, and Euro-Mediterranean Human Rights Monitor, Geneva, 67,651 abductions have been recorded to date during the past four years. The regime forces of Bashar Al-Assad are responsible for about 65,000 (96 percent of all documented disappearances) and other, non-state armed groups, including ISIS, Kurd Self-Management Forces and the Al-Nusra Front, committed approximately 2,400.

Published on August 30 to mark the International Day of the Victims of Forced Disappearance, the report describes the most common scenarios: Victims are kidnapped from either their homes or the street. Sometimes people in military uniform carry out the crime; however, no matter what they wear, perpetrators universally refuse to divulge who they are or the basis for their actions. The parties involved usually deny possession of the victims.

“These constitute not only immoral atrocities, but blatant violations of international law ripe for prosecution by the International Criminal Court,” says Ihsan Adel, Euro-Med Monitor legal advisor. “The United Nations must file charges with the court, demand that all Syrian parties grant access to the independent commission of inquiry, and immediately allow detainees to visit with their families, doctors and lawyers.”

The report also documents the deliberate practice of forced disappearances by various parties as a strategy to neutralize opposition, then destroy all proof of responsibility for crimes such as torture and sexual abuse, to which the seized individuals often are subjected. Abductions are occurring in all Syrian governorates, at the hands of all factions.

In addition, the report elaborates on the role played by non-state factions. The PYD-affiliated Kurd Self-Management Forces have abducted both political opponents and civilians to force them to follow their rules and join their military. Kurdish forces were responsible for 352 forced disappearances, including 43 children and nine women.

A number of smaller groups specifically opposed to the regime also use forced disappearance, targeting families known to be loyal to Al-Assad and holding them as hostages for prisoner exchanges. The number of forced disappearances in territories seized by such groups has reached 211, including 22 children, 11 women, and a number of journalists and human rights activists.

“All forced disappearances are unforgivable; however, those in which the breadwinner of a family is abducted have the most far-reaching consequences, particularly on young children,” says Adel.

“With their husbands' status uncertain, wives of men who have disappeared cannot remarry. Inherited assets cannot be distributed due to the lack of a death certificate. Likewise, the family is unable to receive the breadwinner's pension.Families are too terrified to contact regime authorities to inquire about their relatives' fates. In fact, there have been many cases of individuals who disappeared themselves after inquiring about a loved one.”

The Syrian Network for Human Rights and Euro-Med Human Rights Monitor urge the UN Security Council to take firm and effective steps to fulfill its responsibility toward the victims of forced disappearance in Syria. The Security Council must sue the perpetrators in the International Criminal Court.

“It is clear that many resolutions adopted by the council are regarded as trivial even by the signatories, including the Syrian regime,” says Adel. “It’s way past time to show some teeth.”

The Syrian Network and Euro-Med Monitor call on UN member states, particularly those affected by or involved in the strife in Syria, to demand that the independent investigation commission receive access to all detention centers, and that the parties responsible be held accountable for the fate of the victims.