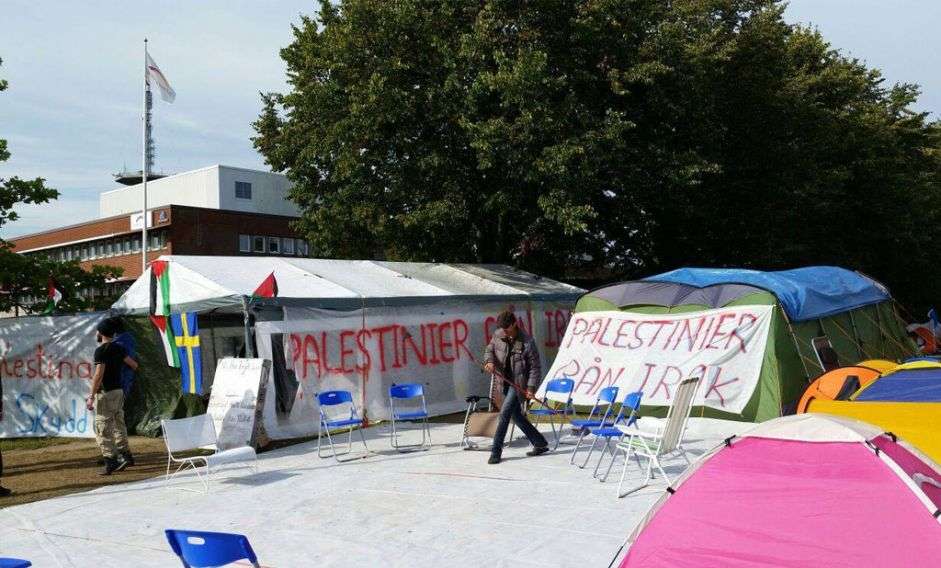 Malmo - The Swedish government is rejecting asylum applications from Palestinians fleeing Iraq and Gaza, ordering them to “return where they came from.” This is a violation of their rights as refugees, warns the Euro-Mediterranean Human Rights Monitor.

Since Aug. 11, about 320 stateless Palestinians from Iraq and another 100 from Gaza, including families, have been protesting in front of the Swedish Migration Agency in Malmö city. A hunger strike was initiated eight days ago.

“These asylum seekers have been exposed to extreme hardship already,” said Ihsan Adel, Euro-Med Monitor legal adviser. “And now, Sweden is refusing them even temporary residence permits, telling them to return to areas that remain highly unstable and risky.”

According to Article 33 of the Convention on the Status of Refugees (1951), “No contracting state shall expel or return ("refouler") a refugee in any manner whatsoever to the frontiers of territories where his life or freedom would be threatened”.

Without residency permits, the Palestinian asylum seekers have no right to access the labor market, higher education institutions, language courses, public housing or any other rights bestowed on other refugees.

Most of the Palestinians from Iraq fled between 2003 and 2006, when they were exposed to serious violations of their human rights, including imprisonment and torture. Iraq’s neighboring states have refused to receive most Palestinians as refugees, causing them to collect in camps in the Iraqi desert on the Jordanian and Syrian borders, which lack the most basic necessities. Others have managed to make to Brazil or Europe.

The Palestinians from Gaza have been struggling against all odds to live under Israeli blockade for eight years. In a United Nations report issued on Sept. 10, the agency declared Gaza would be “uninhabitable” in five years if the blockade does not end.

“The Swedish government, along with the rest of the world, is focusing its attention on the refugees fleeing from Syria,” noted Eman Zeiter, a Euro-Med Monitor researcher in Sweden. “However, there are other refugees who are equally needy and are being deprived of protection.”

Despite camping in small tents in front of the Swedish Migration Agency, often during cold, rainy nights, the protesters have received little attention, causing the asylum seekers to launch a hunger strike. Many have fainted during and have needed hospital treatment.

“They will continue there, on hunger strike, until the Swedish Migration Agency puts an end to their suffering by accepting them as refugees in need of a stable life in dignity and peace,” said Zeiter.

Euro-Med Monitor is calling on the Swedish government to provide the necessary protection to these refugees, and to look at their situation sympathetically in light of the risks that face them if they return.