Euro-Med: Iraqi government is responsible for killing protesters, parliament should play an active role in the crisis 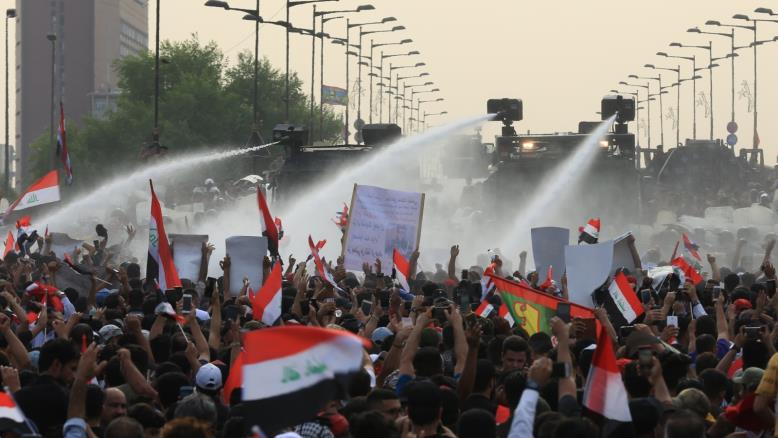 Geneva - The Euro-Mediterranean Human Rights Monitor is following with a great concern the Iraqi security forces' forcible dispersal of demonstrations in the center of Baghdad and a number of southern governorates that were organized to condemn corruption and call for better services and creating more jobs opportunities. Reports indicate that two people were killed, and hundreds of others were wounded.

Thousands of Iraqis took to the streets yesterday during demonstrations organized in protest of the government's practices and policies, the spread of corruption at the state’s institutions, and the arrest of a number of activists.

According to testimonies of demonstrators and Iraqi human rights sources, the security forces attacked the demonstrators and used live bullets against more than one demonstration, especially in the southern governorates of the country. As a result, two civilians were killed and 286 others were injured, while 30 security personnel were injured during the disperse of a sit-in in the Freedom Square in the center of the Iraqi capital.

These demonstrations are the first of their kind against the current government, which will complete its first year in power at the end of October.

Photos acquired by the Euro-Med Monitor shows a number of demonstrators wounded with live bullets, while others fainted after security forces cracked down on demonstrations with bullets and tear gas.

The Euro-Med Monitor said that although the demonstration in central Baghdad was dispersed, demonstrators returned to a sit-in again on a nearby bridge leading to the Green Zone, which is home for the US embassy and the Iraqi government headquarters.

The demonstrators used slogans against the country's rampant corruption and as well as against what they called the "governing class", protesting against the continued disruption of basic services such as electricity and drinking water.

Iraq is the 12th most corrupt country in the world, according to Transparency International.

The Euro-Med Monitor urged the Iraqi government to respect the rights of demonstrators and to listen to their demands rather than using excessive force to disperse protests, which constitutes a violation of human rights and freedom of expression.

The crackdown on peaceful gatherings and the assault on demonstrators is a clear violation of the Iraqi Constitution as well as Iraq's international obligations, especially Article 21 of the International Covenant on Civil and Political Rights.

The Euro-Med Monitor called on Iraqi Prime Minister Adel Abdul Mahdi to open an immediate and impartial investigation to ensure accountability for those who assaulted or fired live bullets on peaceful demonstrators. The Iraqi Parliament should bring all those who issued orders to disperse the peaceful sit-in using excessive force accountable according to the Iraqi law and the norms of international law, the Euro-Med Monitor added.