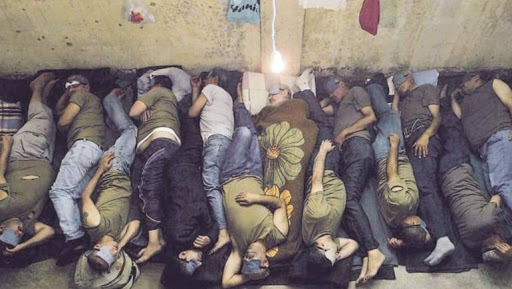 Copenhagen – The Committee of Foreign Affairs at the Danish parliament has listed a petition launched by the Euro-Mediterranean Human Rights Monitor on its website, inviting members to sign it. The petition calls for the release of political detainees in Israeli and Arab prisons in the Middle East and North Africa in the light of the spread of the Coronavirus (Covid-19) around the world.

The official website of the Danish Parliament published the petition which calls on the governments of the region, including Israel, to immediately release prisoners of conscience to save their lives before it is too late.

The petition, launched a few days ago, warned of the dangers threatening prisoners of conscience in prisons known to be overcrowded and lack sanitation, as they might become victims of the COVID19 pandemic.

Cells in these prisons are highly vulnerable to the spread of the virus as they are overcrowded with detainees and lack the necessary infrastructure to limit the spread of the disease. The infection of a guard, a visitor, or a detainee could lead to a tragedy in a short period of time.

Some governments across the region have reached the same conclusion and recognized the catastrophic risks of the coronavirus outbreak in prisons, where Iran for instance, has temporarily released 85,000 prisoners, while the Kingdom of Bahrain has ordered the release of 901 others, transferring 585 inmates to rehabilitation and training programs to serve the rest of their sentences, Euro-Med Monitor said.

The organization added, “unfortunately, political detainees and prisoners of conscience were entirely excluded from such pardons, remain imprisoned in worse conditions than other inmates and suffer from deliberate neglect.”

In Egypt, Saudi Arabia, the United Arab Emirates, and Israel, tens of thousands of political detainees are still in prison, in light of unprecedented threat to their lives if virus spreads to their cells.

Health services of most political detainees are still increasingly deteriorating as a result of deliberate health neglect, which puts their lives at risk, especially in case the infection spreads.

Dozens of detainees were reported dead in Egyptian and Saudi prisons due to the absence of medical care and the spread of infectious skin diseases, as well as medical neglect, Euro-Med noted.

The difficult conditions of political detainees on in the region's prisons should prompt the international community to exert maximum pressure to release them as soon as possible in light of the spread of this virus, the Euro-Med continued as saying.

In light of the inability of governments in the Middle East and North Africa to respond to the spread of the virus and the threat to the lives of detainees in prisons, Euro-Med Monitor demands the immediate release of detainees and the provision of the necessary health healthcare to preserve their lives.

The Geneva-based organization called for an end to the policy of arresting activists on political backgrounds in the Middle East and North Africa, and the need to share accurate information on the spread of the Coronavirus in prisons of the region in a transparent manner.