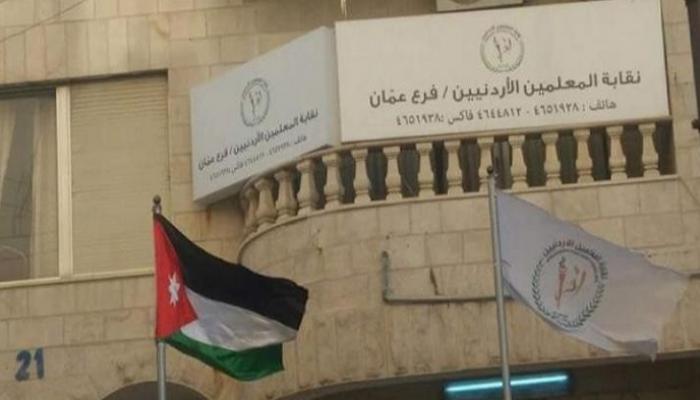 Geneva – After two days of marches organized by the Jordanian Teachers Syndicate calling for teachers’ rights, the Jordanian forces stormed its headquarters, arrested members of its council, and forced it to suspend its work, the Euro-Mediterranean Human Rights Monitor reported, adding that the move has political motivations.

The Jordanian Teachers Syndicate said on Saturday on its official Facebook page that the Jordanian security forces stormed its headquarters in Amman, locked up the employees and visitors inside using threats, and confiscated their phones.

The Jordanian authorities informed those who were present at the headquarters of the decision to seal the place, without showing any judicial order.

The official Jordanian News Agency (Petra) said that Amman’s Attorney General, Hassan Al-Abdallat, decided "to suspend members of the Teachers Syndicate Council and members of the central and branch bodies and departments. The decision also includes stopping the Syndicate from working and closing its headquarters for a period of two years."

The decision included issuing summonses against members of the Syndicate’s Council, to be brought before the competent public prosecutor for questioning about the charges they are accused of.

The decision demanded the Minister of Education to implement what is described as the "legal requirement" regarding the formation of an interim committee to carry out the Syndicate’s administrative and financial management.

The decision prohibited publishing or commenting in all media and social media outlets about these issues, with the exception of the authorized official authority.

In the past few days, the Teachers Syndicate announced that it insists on an allowance the government approved for teachers early this year following a government decision in mid-April to stop the allowance until the end of 2020, starting from May 1, to cope with the repercussions of the Coronavirus crisis.

The Syndicate announced a plan to restore the allowance retroactively, in which it outlined steps, including protest vigils, sit-ins, a hunger strike, and a gradual strike reaching to an open-ended strike.

The Minister of the Interior, Salama Hammad, in a televised statement last Tuesday, responded to the statements of the vice-president of the Syndicate and considered them "unacceptable", and threatened taking "legal measures if they are repeated". His threats were translated into action today, which indicates that there is a political decision to punish the Syndicate and its council for its demands.

The decision against the Syndicate seems to have a retaliatory nature as a result of the growing crisis between teachers and the government, which began on September 5, after the Jordanian security forces used force to break a protest organized by the teachers in Amman to demand an allowance increase.

At the time, the Jordanian authorities arrested dozens of teachers and the crisis escalated quickly, as the teachers decided to enter into an open-ended strike, which lasted for a whole month, the longest in the history of the country.

The decision to prohibit publishing or commenting on the issue on media and social media outlets violates the right to freedom of opinion and expression, and media publishing and indicates a political decision with a legal cover to prevent any media discussions that could expose the nature of the decision.

He stated that closing the Syndicate and prosecuting its members is inconsistent with Article 8 of the International Covenant on Economic, Social and Cultural Rights according to which countries, including Jordan, pledged to adhere to the “The right of everyone to form trade unions and join the trade union of his choice, subject only to the rules of the organization concerned, for the promotion and protection of his economic and social interests.”

The decision jeopardizes the right of unions to exercise their activity freely, and it imposes restrictions except those provided by law and constitutes necessary measures to maintain national security or public order or to protect the rights and freedoms of others. Unions have the right to exercise their duties freely according to the basic provisions of international human rights, which is included in Convention No. 87 concerning freedom of association and protection of the right to organize adopted by the General Conference of the International Labor Organization, which emphasized the protection of unions from dissolution or suspension by an administrative decision, and the right of unions to enjoy protection for their headquarters and correspondence and phone calls.

The decision to suspend the Teachers Syndicate should be canceled, enabling it to exercise its work and tasks freely, and ensuring its right and the right of its council to a fair trial if there are legal cases against them.

The Jordanian authorities should stop using the judiciary to fight or deter opponents, and they should resort to dialogue to reach solutions instead of using heavy-handed solutions that are not consistent with Jordan's domestic and international pledges, and clearly violate the basic principles of democracy and human rights.